Wrapping up our our series on Amazon’s new cast members is the lovely Sara Zwangobani. Sara is an Australian actress who is best-known for her roles in a number of Australian TV series and soap operas. From recurring roles to guest appearances, Sara has appeared in Monarch Cove, Love My Way, and Don’t Stop me Now, among others.

Sara also has a number of stage roles under her belt, one of the most interesting of which included playing a female Marc Antony in Bell Shakespeare’s production of Julius Caesar in 2018, which toured around Australia. She also has a Lord of the Rings connection, having played the part of Rosetta in Sydney Theatre Company’s A Streetcar Named Desire in 2009, which featured Cate Blanchett as Blanche DuBois.

Given her striking good looks, Sara could be cast in any number of roles in the new Amazon series. A Numenorean queen, or perhaps an Elf of Eregion during the time of the making of the Rings of Power? No matter the region and people of Middle-earth she becomes a part of, Sara is a perfect addition to the Amazon TV series cast.

Editor Note: Join TheOneRing.net as we focus on the recent cast member announcements for Amazon TV’s The Lord of the Rings inspired TV series. Throughout the month, and as part of our Tolkien Advent Calendar celebration, we will be taking a deep-dive into their previous work, relating that to the world of J.R.R. Tolkien. Today’s calendar is below!

END_OF_DOCUMENT_TOKEN_TO_BE_REPLACED 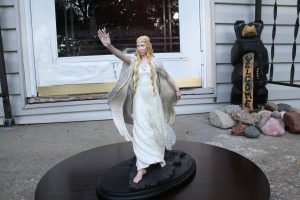 My favorite piece from Comic-Con 2016 has arrived and I’m super excited to finally get a chance to review it. The Lady Galadriel by our friends at Weta Workshop and sculpted by the phenomenally talented Lindsey Crummett is without a doubt the best Galadriel that’s ever been done. It just blew me away back during Comic-Con and the production version does as well. As you will see in the video, this piece has some really awesome detail, from the face to that intricate outfit. These are just some of the reasons why this piece sold out during pre-order and with an edition size of 750 pieces will be difficult to tack down.
END_OF_DOCUMENT_TOKEN_TO_BE_REPLACED