IGN reports that, during an interview at the 2022 Calgary Expo, Sean Astin confided that the “preview” for The Rings of Power gave him “the chills”.

“I for one am excited,” he said. “I saw the preview for it, and it gave me chills. It looked like they got it. I’ve been saying the whole time, they’re gonna do it right. There’s no way Amazon is gonna pay almost a billion dollars for a franchise just to screw it up.”

(Ed: it’s a bit ambigiguous, but we’re pretty sure Sean means the teaser trailer and that, unlike, the Vanity Fair folks, he has not seen the initial episodes.)

Astin, who was being interviewed by bestselling author Sam Maggs, said he hopes the Amazon TV series will bring new fans and renewed awareness to Peter Jackson’s films. And he added that, even if the series didn’t prove a hit, he still supported the attempt and “people with being determined and trying and expressing themselves.”

“I feel that way about all remakes. You have classics that you think ‘please don’t touch that,’ but the truth is, nothing can ever take it away.”

As well as sharing a few of the foursome’s many reminisces of their moments together on the set of Peter Jackson’s The Lord of the Rings, Maher observes that even now they share a close bond and friendship.

“Billy said this thing recently about the scene of second breakfast, where we stop and Aragorn is saying, ‘What’s going on?’ and we have the second breakfast thing,” he says. “I didn’t remember this, but Billy is totally right and jogged my memory. That was an incredibly rushed scene because it started flash-snowing [Wood clarifies that this was in November, so this shouldn’t have happened in the Southern Hemisphere]. And Pete basically came over to us and was like, ‘You’ve got about 45 minutes to an hour to get this and go, otherwise we’re in real trouble with all of our gear.’ And we got what ended up being a real amazing moment in the film, but it was fast.”

Boyd explains that as an actor, that kind of hastiness usually leads to disappointment. Astin, meanwhile, recalls being concerned that maybe not everyone cared about a scene the hobbits were all excited about because it wasn’t strictly necessary for the film.

“But then it becomes a scene that a lot of people talk about,” says Boyd. “And it was honestly done in like, an hour. And then we’re sitting on washing machines drinking whiskey like… what just happened?

Read the full interview on IGN

It has long been rumored…and now we can finally confirm! For the first time, Warner Bros. will be releasing ‘The Hobbit’ Trilogy and ‘The Lord of the Rings’ Trilogy on 4K UHD on December 1st, 2020. To celebrate, we have a special TheOneRing.net exclusive message to fans from Samwise Gamgee himself, Sean Astin:

But wait…There is more! Directly from our friends at Warner Bros.:

Warner Bros. is also announcing that in the summer of 2021 it will be releasing a 4K ULTIMATE COLLECTORS’ EDITION with theatrical and extended versions of ALL SIX of the remastered films and new bonus content.  Additionally, to celebrate the 20th anniversary of the first The Lord of the Rings film, a newly remastered Blu-ray trilogy of The Lord of the Rings films will be available in the Fall of 2021, also including the theatrical and extended versions.

If you are like me, and you may not fully grasp the significance of this news – don’t worry, hopefully I can shed some light on the topic. Bottom line – Peter Jackson and the team remastered the entirety of both trilogies (and extended editions), including the special effects, to make these masterpieces of cinema look as amazing and breathtaking on your modern devices as the day we saw them in the theater. And most likely a lot better!.

In the coming days we’ll sort through all the various options and places to purchase these editions and provide you with a one stop guide. In the meantime, know that 2020 will be ending on a positive note as we get to enjoy our favorite films all over again!

Here’s a high res preview of the box art!

What lessons can Amazon learn from the team that’s been there & back again? Let’s find out! Join TORn Tuesday hosts Cliff Broadway and Justin Sewell for an epic All-Star LOTR panel tomorrow! Joining us will be Mark Ordesky (Executive Producer), Sean Astin (Actor – Sam Gamgee), Rick Porras (Co-producer), Jim Rygiel (Visual Effects Supervisor), Michael Pellerin (Producer, multiple LOTR & Hobbit documentaries), Keith Stern (Ian McKellen’s Digital Manager), and Sala Baker (Actor – Sauron), as we all relive memories of filming LORD OF THE RINGS. What were those early days on set like? Did producers follow the fan discussion online? What made this effort so special? Get your deep knowledge questions ready for this multi-Oscar winning team and join the Live chat tomorrow 5pm PT. There are three options to watch the live stream, each of which let you comment and ask questions of your own: 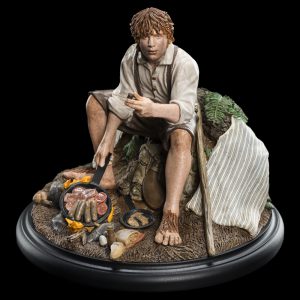 One of my favorite lines from our freinds at Weta Workshop is the mini-statue line. As I’ve mentioned before, these statues are really super well done, and done at a price that allows for collectors on a budget to get some Middle-earth goodness.

A statue of Samwise was long over due, as he has not had one from Weta since the Sam and Bill statue 17 years ago. Samwise comes in with a price tag of $79 and is a short pre-order with a shipping due date of just this month.

Finally it came down to a duel between Elrond Half-elven and Gollum. The votes have been counted, and we can now announce, this year’s winner is…
END_OF_DOCUMENT_TOKEN_TO_BE_REPLACED