END_OF_DOCUMENT_TOKEN_TO_BE_REPLACED

IGN reports that, during an interview at the 2022 Calgary Expo, Sean Astin confided that the “preview” for The Rings of Power gave him “the chills”.

“I for one am excited,” he said. “I saw the preview for it, and it gave me chills. It looked like they got it. I’ve been saying the whole time, they’re gonna do it right. There’s no way Amazon is gonna pay almost a billion dollars for a franchise just to screw it up.”

(Ed: it’s a bit ambigiguous, but we’re pretty sure Sean means the teaser trailer and that, unlike, the Vanity Fair folks, he has not seen the initial episodes.)

Astin, who was being interviewed by bestselling author Sam Maggs, said he hopes the Amazon TV series will bring new fans and renewed awareness to Peter Jackson’s films. And he added that, even if the series didn’t prove a hit, he still supported the attempt and “people with being determined and trying and expressing themselves.”

“I feel that way about all remakes. You have classics that you think ‘please don’t touch that,’ but the truth is, nothing can ever take it away.”

As well as sharing a few of the foursome’s many reminisces of their moments together on the set of Peter Jackson’s The Lord of the Rings, Maher observes that even now they share a close bond and friendship.

“Billy said this thing recently about the scene of second breakfast, where we stop and Aragorn is saying, ‘What’s going on?’ and we have the second breakfast thing,” he says. “I didn’t remember this, but Billy is totally right and jogged my memory. That was an incredibly rushed scene because it started flash-snowing [Wood clarifies that this was in November, so this shouldn’t have happened in the Southern Hemisphere]. And Pete basically came over to us and was like, ‘You’ve got about 45 minutes to an hour to get this and go, otherwise we’re in real trouble with all of our gear.’ And we got what ended up being a real amazing moment in the film, but it was fast.”

Boyd explains that as an actor, that kind of hastiness usually leads to disappointment. Astin, meanwhile, recalls being concerned that maybe not everyone cared about a scene the hobbits were all excited about because it wasn’t strictly necessary for the film.

“But then it becomes a scene that a lot of people talk about,” says Boyd. “And it was honestly done in like, an hour. And then we’re sitting on washing machines drinking whiskey like… what just happened?

Read the full interview on IGN

Why do some Nazgûl thrive when commanded to hunt down their master’s stolen Ring while others falter under pressure? Why do some revel in the responsibility of throwing down their enemy when others wither like fog in strong sunlight?

You might not know it, but nine (count them!) keenly honed success habits keep them hot on the trail. Nazgûl apprentices, here are those nine instinctive habits that the most successful Ringwraiths draw on in their daily unlife to keep the Dark Lord number one. Read and learn.

Captain Planet does it. Voltron does it. The Power Rangers too. So take heed: when it matters, ensure you gather under your fell leader so that even the Wise might fear to face you.

Black never goes out of style. And the effect is scary as the Dickens when when you loom menacingly into view of your prey just as the light fades.

Never forget that you and water do not get along. At all. In that sense, you might as well be the Wicked Witch-king of the West. Next time you consider fording that tiny creek? Think twice.

They say if you love it, put a ring on it. But only the Dark Lord may do that. Use a Morgul Blade to express your affection instead. It’s the smart way to ensure your new BFF will stay by your side always and forever!

5) Maintain a ready supply of remounts and robes.

There are few worse humiliations for a Ringwraith than having to crawl back naked and unclothed to your Dark Lord because you went for an impromptu dip and it all went pear-shaped. So for the love of Morgoth, pack extra robes (black, of course) and take a spare horse or an enormous flying raptor thing (or both!) just in case.

6) Let your minions do the dying for you.

Need to destroy the gates of the enemy fortress? Compel your horde of minions to do it for you! Drive them before you like cattle until they fear you more than the enemy’s darts and arrows. Don’t forget to ride to your glorious victory over the crushed, mutilated corpses of friend and foe for additional intimidation.

7) Remember, fear is your chief weapon.

And surprise. And fanatical devotion to The Po… err … Sauron. Anyway, the key point is intimidate your opponents (or your minions) until they give you what you want, or flee in terror.

8) Always stop to smell the roses.

Your sense of smell is even better than a labrador’s or a beagle’s. Only the foolish Nazgûl rush heedlessly ahead. Savour the scents and let your nose guide you to that which the Dark Lord desires.

You are one of the Nazgûl, the chief and most-feared servants of the Dark Lord, not a camp counsellor. Be the Nameless Fear. Names are for lesser minions — and, seemingly, Khamûl. Because he just has to be different from everyone else.

Throwback to a post from some years ago, by the very excellent Staffer Demosthenes with help from LurkingLaurie.

Images from PJ’s LOTR via the very excellent FrameCapLib LOTR screecap project; and one from Ralph Bakshi’s LOTR (1978). 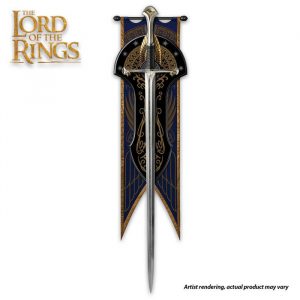 Our friends over at BudK have an absolutely fantastic new version of Anduril that fans can order right now. This Museum Collection edition of Anduril features a 1060 high carbon steel blade, with (their website tells us) several improvements over the standard version of the sword, to more accurately replicate the hero filming props. The surface polish is finer, the engraved blade runes are more accurately shaped and detailed, and the fuller grooves are now the correct length. Each sword is individually serial numbered on the blade and includes a certificate of authenticity.

A 14 1/8” wooden wall display offers an intricately detailed gold-plated metal crest and gold-plated sword mounting arms, and also includes a Gondorian themed blue cloth banner to be hung behind the display. The display and banner feature the ancient heraldry of the Kingdom of Gondor: a flowering white tree of Gondor, the seven stars of Elendil, and a winged crown above them, the symbol of the king. The Museum Collection Anduril is considered the ultimate piece of the United Cutlery Museum Collection to most The Lord of the Ring collectors. Pre-order yours today to ensure you’re first in line for this long-awaited treasure. Anduril comes in with a price tag of $449, and fans can expect to have it around the end of November this year.

Allow me to put LOTR in perspective: