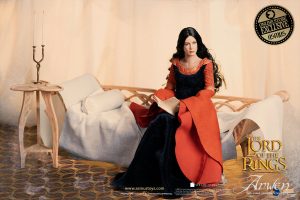 Comic-Con 2018 is in the books, and if you followed us on Social Media you had a chance to see us share what was going on at our friends at Weta Workshop’s booth. Now that I’m back, I wanted to share all the pics I took of the wonderful things I saw at their booth. They had the jaw dropping (watch a recap of the Weta live video when they unveiled the new pieces) Master Collection Treebeard, new Balrog Bust, and the stunning Arwen on Asfaloth. All of these pieces were absolutely awesome and all may end up in my collection! The one piece we can all add right now is the Arwen on Asfaloth statue. She comes in with a price tag of $699 and an edition size of 750. However, fans will have to be patient until early 2019 to get her. In the meantime please enjoy the booth tour and various shots of what amazingness was at the Weta booth.
END_OF_DOCUMENT_TOKEN_TO_BE_REPLACED

END_OF_DOCUMENT_TOKEN_TO_BE_REPLACED List of some of the Auction and Raffle prizes:

Here are some of the items we will have available for the silent auction and raffle, including something for the Non-Attending Supporters of our Indiegogo campaign. We have some rather big ticket prizes, numerous autographed items, and some original artwork for you, and at least one item offered for a Charity Auction. Everything on this list will be split fairly evenly between the silent auction and the raffle, giving everyone a chance to walk away with something very cool. This is not a complete list, things are still arriving, but it will give you an idea of what you will have a chance to either bid on or try and win in a Chinese style raffle drawing. Lord of the Rings: The Return of the King “For Your Consideration” script – signed by numerous LOTR cast and crew One note for those of you not attending the party, two of the Signed TOPPS cards, the Sam and Frodo cards, will be raffled off for the Non-Attending supporters during our Live Stream of the party. The being we know as Sauron was quite a peaceful Maiar like Gandalf and Saruman & Radagast. Loved blacksmithing & was learning under Aüle before Melkor/Morgoth corrupted him https://twitter.com/theoneringnet/status/1541455547773292544

I mean this one does seem to check out with Tolkien’s lore. Everything evil in Tolkien’s work tends to be corrupted. https://twitter.com/theoneringnet/status/1541455547773292544