END_OF_DOCUMENT_TOKEN_TO_BE_REPLACED

The awesome folks over at BudK have let us know that The Gauntlet of Sauron is now in-stock and ready for purchase. This thing is super cool looking; if you’re into prop replicas, this one will look amazing in your collection.

You can snag this right now for $349 from the BudK website.

Here is the full product description from United Cutlery:

A handmade, fully functional actor-scale reproduction of the gauntlet worn by the Dark Lord Sauron in The Fellowship of the Ring. Strictly limited to 1000 pieces worldwide, each one is presented with a wood wall display featuring a Sauron graphic motif. Crafted of genuine leather and iron, the gauntlet features more than 35 plate mail parts with an iron black finish and Intaglio surface engraving. Includes the One Ring with inscription, crafted in gold-plated metal.

END_OF_DOCUMENT_TOKEN_TO_BE_REPLACED 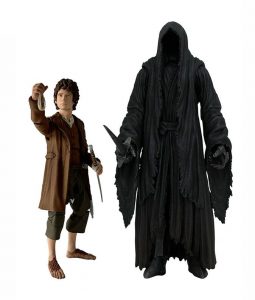 So today we’re officially launching a contest with @NumskullDesigns to give away brand new versions of what you see in this review. Rules are simple. Like this tweet and follow both TORn and @NumskullDesigns. We will pick a winner three weeks from today. Good luck 🍻 https://twitter.com/theoneringnet/status/1380165148900536327