After visiting the wintry lands of Hobbits, Rohirrim, and Dwarves, we set sail for lands to the west before once more returning to the shores of Middle-earth.

END_OF_DOCUMENT_TOKEN_TO_BE_REPLACED

Our friends at Weta Workshop revealed the new Cave Troll collectible at their Weta Workshop’s Comic-Con at home. It’s the next superb piece in their premium statue series, and it goes live for pre-orders on Wednesday, September 30th.

While this new sub-line of statues is new to Weta’s line of collectibles, at only 500 pieces, this statue won’t be lasting long. Collectors should log into their accounts before it goes live (times listed below) and be ready to be quick with the order button. We’ve been waiting for years to get another shot at the Cave Troll. Make sure you’re logged in and ready to go!

END_OF_DOCUMENT_TOKEN_TO_BE_REPLACED 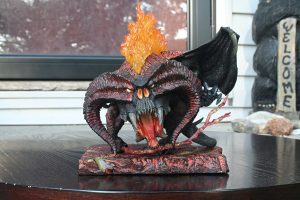 Last year we teamed up with the folks at Star Ace Toys to talk about their Defo-Real Ringwraith. Well, we’re pleased to do it again, this time we’re talking about their Defo-Real Deluxe Balrog. This version of the Balrog is stylized, similar to the way the Ringwraith has been done. It’s a very fun twist on one of the coolest Middle-earth creatures. The cherry on top is if you get the deluxe version, you also get a very cool mini Gandalf, so you can recreate Gandalf and the Balrog battling it out on the Balrog’s very own Moria base. The Balrog is in-stock, ready for purchase, from Sideshow Collectibles for $105. So check out the review and then go take a chance on this very cool Balrog.

END_OF_DOCUMENT_TOKEN_TO_BE_REPLACED

If you survived the dark and dangerous halls of Moria, congratulations! Here is your Finisher Certificate. Print it out and share a photo of yourself on our World and Works of J.R.R. Tolkien Facebook page, and tell us what you encountered on your run. Perhaps you had to fend off orcs or cave trolls? Did a Balrog singe your sneakers?

There is still time to run the two previous Middle-earth Virtual 5k races. The Shire Sprint and Racing to Rivendell are still up and available for download. The certificates for those races are in the posts.

You have until May 29th to complete all four races to be eligible for the final additional certificate that shows you completed all four races. The next and final race will be posted this Friday, May 22. We hope you’ll join us. Congratulations again!

Frodo had a good voice, and the song tickled their fancy.