Last week saw the online release of Viggo’s powerful and moving directorial debut, Falling. You can rent or buy the movie now on Amazon or iTunes. It’s a profound, compelling piece about families, love, and dementia. Viggo and Henry will be chatting about the movie, and about the power of story telling, at 5pm PT/ 8pm ET tomorrow; find TORn Tuesday on YouTube or Facebook. Don’t miss it!

In a time when we simply cannot physically celebrate together, join TheOneRing.net and fans from around the globe, as we honor the legacy of The Professor with a Tolkien birthday toast on what would have been his 129th birthday. (Tolkien’s Birthday – January 3rd 1892)

As part of the long-standing tradition amongst the Tolkien community, we will be hosting two LIVE events via Zoom. These two events will take place January 3rd 2021 at 8pm GMT and then again at 8pm PST. The respective Zoom rooms will open at 7:45pm, to give all plenty of time to prepare for the toast.

As we may have a rather large crowd joining in the celebration, you will be initially muted when you join the Toast. We will open the room for discussion, fun and frivolity following the toast at 8pm.

To participate, use the details below!

Exciting news this morning, from US Tolkien publishers Houghton Mifflin Harcourt: a previously unseen collection of Tolkien’s writings about Middle-earth will be published June 2021. Here’s the press release from HMH:

Houghton Mifflin Harcourt Books & Media will publish The Nature of Middle-earth, a previously unseen collection of writings by J.R.R. Tolkien, in the U.S. on June 24, 2021. Presented for the first time in one volume and edited by Carl F. Hostetter, the writings will transport readers back to the world of The Silmarillion, Unfinished Tales, and The Lord of the Rings.

Deb Brody, HMH’s VP and Publisher, says: “It is well known that J.R.R. Tolkien published The Hobbit in 1937 and The Lord of the Rings in 1954–5. What may be less known is that he continued to write about Middle-earth in the decades that followed, right up until the years before his death in 1973.

“For him, Middle-earth was part of an entire world to be explored, and the writings in The Nature of Middle-earth reveal the journeys that he took as he sought to better understand his unique creation. From sweeping themes as profound as Elvish immortality and reincarnation, and the Powers of the Valar, to the more earth-bound subjects of the lands and beasts of Númenor, the geography of the Rivers and Beacon-hills of Gondor, and even who had beards!

“This new collection is a veritable treasure-trove offering readers a chance to peer over Professor Tolkien’s shoulder at the very moment of discovery: and on every page, Middle-earth is once again brought to extraordinary life.”

The Hobbit was first published in 1937 and The Lord of the Rings in 1954–5. Each has since gone on to become a beloved classic of literature, and an international bestseller in more than 70 languages, collectively selling more than 150,000,000 copies worldwide.

The Nature of Middle-earth will be published subsequently in several languages by numerous Tolkien publishers worldwide.

CARL F. HOSTETTER has for many years been one of the world’s leading Tolkien experts and respected head of the Elvish Linguistic Fellowship. He has worked as a Computer Engineer for NASA since 1985.’

Harper Collins, the UK based publisher for Tolkien, will also release this new work in June next year. You can read The Guardian newspaper’s article about this highly anticipated publication, here. 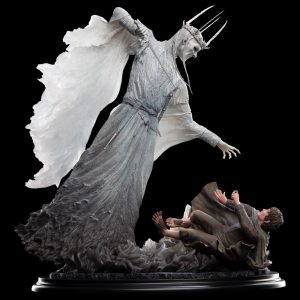 Yesterday this amazing looking collectible of the Witch-king and Frodo at Weathertop went up for pre-order from our friends at Weta Workshop. Today, only 24 hours later, this statue is already showing as being “low on stock”. So while it won’t ship until March, I would not hesitate in ordering this collectible ASAP, as the 700 pieces in this edition size won’t be lasting long. Also, don’t forget about Weta’s payment plan system making it even easier for fans to snag this superb piece of art.

As we shared with you a couple of weeks ago, our friends at Weta Workshop posted part one of a video, showing us the path the Witch-king and Frodo statue took to arrive at its final design. Today, fans can watch part two, and get to see what this amazing piece will finally look like, so we can prepare to place orders sometime in the near future. This piece is absolutely stunning and the final choices for the statue really do help create something very special. I cannot wait to order this myself, and hope you all enjoy the video below showcasing the journey of this collectible. After watching the video, use the link above to sign up, to know when this goes up for pre-order.

END_OF_DOCUMENT_TOKEN_TO_BE_REPLACED

Say hello to wave 4 of our Lord of the Rings TUBBZ! Who would you like to see in duck form next? https://bit.ly/3ermebR

Bilbo & Frodo were both 50 when they went on their adventures.