From Middle-earth to Mother Goose… Ian McKellen has often spoken of his love of pantomime – a passion he shares with fellow actor Adam Brown (Ori in Peter Jackson’s The Hobbit trilogy). McKellen debuted as a Dame at the Old Vic back in 2004; and last year Brown wrote and directed a pantomime at the Newbury Corn Exchange. (He’s part of a team who write and direct – and who will be at it again at the Corn Exchange this coming Christmas!)

Now they will appear in pantomime together, in a production of Mother Goose. The show will run in London (at the Duke of York’s theatre) Dec 15 2022 to Jan 23 2023. Before that, Mother Goose starts out in Brighton; and in the early part of 2023 it will play in Liverpool and Oxford.

Brown got in touch with TORn to let us know how excited he and McKellen are to be reunited on stage. We’re excited too; and for our fellow panto fans, tickets can be purchased here.

It’s that time of year, when fans from the world over gather in downtown Atlanta, for a weekend for well-mannered frivolity. Or crazed depravity. Or, most likely, some combination of the two. This year, alas, coronavirus means no in-person DragonCon, which is sad for all those who are missing seeing friends there. But it’s great new for anyone who has never been able to get to Atlanta, as this year you can join the fun online! And there is PLENTY going on for fans of Middle-earth. Let’s take a look…

Staffers deej and greendragon will be taking part as ever, and TheOneRing.net’s panel will be online at 11.30am ET on Saturday (5th). There, deej and greendragon will be joined by High Fantasy Track assistant director Madeye Gamgee, who was recently lured into joining the TORn staff. We’ll be looking back on the past 12 months of Tolkien fandom, and looking forward to see what we can be excited about in the year ahead. (Spoiler: there’s actually rather a lot!)

Before that, on Friday evening at 8.30pm ET we’ll be hosting a Lord of the Rings: The Fellowship of the Ring (EE) watch along. Set up your own device, and we’ll all hit play together at 9pm precisely; and text chat along as we watch. AND earlier on Friday, you can catch a panel with none other than Nori, Ori, Bombur and Bifur: Jed Brophy, Adam Brown, Stephen Hunter and William Kircher will be appearing together to chat all things dwarvish!

There are lots of other things happening which will be of interest to Tolkien fans. Here’s a list of highlights of the con weekend, beginning this evening:

All of this content is available on links. For DragonCon Classics, click here. For DragonCon Fan Tracks, click here. For DragonCon Main, click here. And for any of the High Fantasy track panels, see the specific links included above. Also be sure to check out the High Fantasy track’s Facebook page for further details, and all the other exciting panels they have lined up. (You can catch Madeye Gamgee talking Narnia, and greendragon talking The Witcher!) AND you’ll also want to check out opportunities for autographs and virtual meet and greets, from Jed Brophy, Adam Brown and Stephen Hunter! Click here for details.

And as if that weren’t enough… We are also excited to let you know that there WILL be TORn t-shirts available! You’ll be able to order them online, and we’ll be revealing the designs for 2020 in our panel on Saturday, 11.30am ET. So please join us then! We’ll also post links here for buying, after Saturday’s reveal.

It’s all happening at DragonCon 2020. We may not be able to gather in person, but we can still have merry meetings online; see you for panels, movie viewing, and more. Let the fun begin! 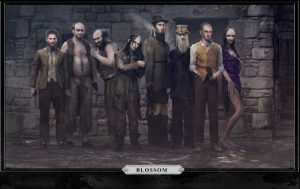 Exciting news for dwarf lovers! Graham McTavish, better known to Hobbit fans as Dwalin, is directing his first movie. McTavish will also appear in the film, and is joined by fellow dwarf actors Adam Brown (Ori) and Dean O’Gorman (Fili). Their director is roping in a few of his Outlander co-stars too, for good measure – actors Stephen Walters (Angus) and Duncan Lacroix (Murtagh) will also be along for the ride.

The film is called This Guest of Summer, and promises to be a very funny but dark horror-comedy. Here at TORn we’re especially pleased, as we’ve been promised behind the scenes access and info; and you too could be involved in this new project!  Whilst the independent film does have backing, McTavish and his team have taken it upon themselves to raise some of the budget – so they are crowd funding.

For as little as $10, you could be part of the effort to make this movie happen – and there are some VERY cool perks to be had! For $150, you could have one of the cast record your answer phone greeting for you – stun your friends when Dwalin answers their calls! Other perks include a chance to interview a cast member, or you could claim a piece of treasure from Smaug’s lair! A gold coin from the set of Peter Jackson’s Hobbit films could be yours – along with a photo of the three dwarves with said coin, which they will then send to you (if they can be persuaded to part with it…)

Check out the Indiegogo campaign here, and see what goodies you might like to claim! And watch TORn for news as this film gets underway.