Following on from last night’s teaser trailer, Prime video have now revealed names and actors behind three more of those character posters.

This is High King Gil-galad, played by Benjamin Walker. In the teaser trailer, we see him standing on a stone platform – presumably in Lindon – golden leaves around his feet, staring up into the sky – presumably watching the meteor we saw soaring overhead.

It was clear this would be one of our Harfoots – but we didn’t know which one. She is Elanor ‘Nori’ Brandyfoot, played by Markella Kavenagh – who seems to be the narrator of the teaser trailer. Is there some significance to her dwarven style nickname? And a thought about that last name: etymology of ‘Brandywine’ can be from dutch ‘brandwijn’ or icelandic ‘brennevin’ – ‘burn (or distil) wine’; OR it can come from welsh name Branwen, ‘raven fair’. So here it could mean ‘raven foot’ (dark hairs on toes, presumably); or possibly ‘burn foot’ – perhaps foreshadowing the fiery pit she appears to walk into in the teaser trailer…?

Prime video are not giving us much to go on with this one – they call him The Stranger, played by Daniel Weyman. Is this the man we saw in the pit of fire, with one of the Harfoots reaching out to him? It is certainly his hand we see, holding a Harfoot hand, at the end of the trailer. Who is he? Annatar? One of the Istari? Some entirely new character…?

We hope you enjoyed our Official Trailer Watch Party last night – staff and guests went over five hours, poring over every detail of the trailer, wondering what it all might mean, and sharing our hopes and fears. We’ll bring you any more news as soon as we have it!

Yesterday, following Vanity Fair’s First Look article, we posted all the characters who have been confirmed from those 23 character posters we saw last week. Today, we can further confirm another character.

This is Halbrand, played by Charlie Vickers and described in Vanity Fair as ‘a mortal castaway … who is a new character introduced in the show … Halbrand is running from the past.’  His leather armour and horse head sword are strongly reminiscent of Rohan; perhaps his people are ancestors of the horse lords?

Yesterday we had speculated that the above image might show Halbrand; but we then confirmed that it is in fact the son of a created human character, Bronwyn, and the hilt he is holding is hers. We’re still wondering why this Bronwyn would have such a sinister looking object, which appears to be marked with dark speech. There is surely some interesting backstory to come here, about this ‘broken heirloom’…

One further comment to make about the above image, which we know shows Galadriel, played by Morfydd Clark, and described in Vanity Fair as ‘Commander of the Northern Armies’. We remarked yesterday on the eight pointed, Feanorian star on her chest (not seen in the character poster image, but seen in the image from Vanity Fair, below), and wondered what it might signify. Staffer Garfeimao had also pointed out that, below the two trees of Telperion and Laurelin on her dagger hilt, there are three pearls or gems. Could these represent the three Silmarils? And if so, why do we see these markers of Feanor and the Silmarils on Galadriel’s armour and weaponry? Are these simply ancient heirlooms she continues to use, or are the showrunners suggesting they have a special significance for her? Much to ponder!

Here’s what Vanity Fair’s article reveals (or confirms, or in some cases, suggests…) about those 23 character posters we saw last week. (All quotations are from VF’s ‘First Look’ article.)

This is Owain Arthur as Prince Durin IV, ‘prince of the bustling subterranean realm of Khazad-dûm’. As we noted, his hammer hilt reads ‘Awake Sleeping Stone’.

Galadriel, played by Morfydd Clark, and described in Vanity Fair as ‘Commander of the Northern Armies’. There had been rumours of short hair for Galadriel – the Vanity Fair images show us otherwise! We also see an eight pointed, Feanorian star on her chest. Significant…?

Elrond, played by Robert Aramayo. Vanity Fair describes him as, ‘a politically ambitious young elven leader’ – and he does have short(ish) hair.

This is silvan elf Arondir, a newly created character, who is played by Ismael Cruz Cordova. His closely cropped hair is the shortest of the lot; his earthy, rugged attire sets him apart from the other elves we have seen. Clearly silvan elves are not quite like their high elven kin…

This is Bronwyn, a created human character, and Arondir’s ‘forbidden love’. She is described as a ‘single mother and healer’ – we see her apothecary’s sickle in this image. She’s played by Nazanin Boniadi.

The Rings of Power includes ‘Two lovable, curious harfoots, played by Megan Richards and Markella Kavenagh’. The two character posters above seem most likely to be them.

As we already knew, ‘Brit of Jamaican descent, Sir Lenny Henry, plays a harfoot elder’. Could this image show him? Perhaps the clutched scroll is an indication of his elder wisdom?

From VF: ‘Another story line will follow a sailor named Isildur (Maxim Baldry) years before he becomes a warrior and cuts the soul-corrupting ring off Sauron’s hand, then falls victim to its powers himself.’ Could the rope here suggest a sailor?

The Rings of Power will feature ‘the elven smith Celebrimbor ([played by] Charles Edwards)’. Could either of these seemingly elvish characters be Celebrimbor? Most likely not the one all in gold; this is rumoured to be Gil-galad, and certainly he seems kingly. So do we see Celebrimbor in red?

(My original thinking was this – but see below for an update!)

This one is total guesswork… VF says we encounter, in the ‘Sundering Seas … a mortal castaway named Halbrand (Charlie Vickers), who is a new character introduced in the show. Galadriel is fighting for the future; Halbrand is running from the past. ‘ There aren’t many of the character posters which look like they might be from the world of men. Could THIS be Halbrand? Could the evil looking, broken blade be part of the past from which he is running? (We do see a wooden chest on the raft, when he and Galadriel meet at sea – so it’s possible he bears with him artefacts from his past…)

UPDATE – VF reached out to let us know that this image in fact shows Bronwyn’s (seen above with sickle) son, and the hilt he is holding is hers. But WHY would she have such a sinister looking object…? Some interesting backstory to come there, methinks, about this ‘broken heirloom’…

Finally, VF tells us that our two Harfoots ‘encounter a mysterious lost man whose origin promises to be one of the show’s most enticing enigmas’. Of all the character posters, this to me is the most enigmatic. So I’m putting my money on this dishevelled, grubby character being our mysterious being… 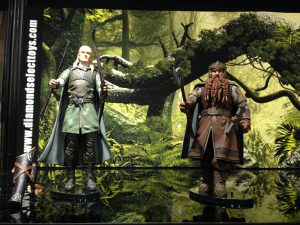