Back in 2002, I sat down in a theater full of fellow Ringers at midnight as an unknown jovial British man with a deep voice walked out to introduce The Two Towers. Andy Serkis had come at the invite of TheOneRing.net to opening night. Nobody knew who he was other than the IMDb credit and 3 seconds of trailer time — and this guy looked & sounded nothing like Gollum. There was also a lot of chatter leading up to the release of The Two Towers that book lovers were terrified of — that the elves had been reassigned from the books to honor the last alliance at Helm’s Deep (ruining Tolkien’s greatest battlefield reunion in The Return of the King). Leaked set pics showed Arwen fighting at Helm’s deep. Jar Jar Binks all-CGI characterization had “ruined” Star Wars, and all-CGI Gollum was ready to ruin Tolkien.

The lights dimmed. The screen showed the familiar landscapes. Then the camera dived INTO the mountain to replay one of the greatest scenes of Fellowship (natch, film history). Oh great, I thought, another film that does “when we last left our heroes” recap. And then the camera follows Gandalf as he falls into battle with Durin’s Bane, as an epic choral music laments their fall into the great chasm. I lept out of my seat! I couldn’t believe a movie had just shown me things I had never seen before, never expected, and a style of storytelling I didn’t think possible. The Two Towers changed my movie going life, and it is still my favorite of the trilogy.

My Rings of Power take after seeing the pilot episodes twice and really diving into the visual details:

Prime Video’s The Rings of Power brings back that feeling of discovery. It changes what television is capable of. It redefines multi-storyline TV. It completely immerses you in Middle-earth from the start, and delivers an incredible storytelling experience that stays true to the tone of Tolkien while necessarily charting a new path.

The Rings of Power finally delivers on Gimli’s promise to the Fellowship that his kin would provide a warm welcome in Moria. We finally see dwarven culture at its pinnacle — a fully realized society that is well-fed, well-worked, and well-machined. These dwarves will feel familiar to Hobbit trilogy fans, with great-looking, practical makeup FX (allegedly supported by Weta Workshop), but it’s the characterizations that really take this culture beyond the comedy of the movies. Fans of deep lore will rewatch the dwarven scenes to spot the many Easter eggs of items lost to time in the books.

All the other lands and races are equally fully realized, even the orc culture. We are all aware of the amount of effort needed to accomplish creative at this level thanks to Peter Jackson’s Appendices. It’s obvious hundreds of top creative talent are collaborating on this show. There is a visible sense of pride in the work from all the details both visual and narratively. This is a billion dollar TV show and it shows. It takes that much support to realize Tolkien’s vast imagination — which is larger in the Second Age than the Third Age seen in the films. The Second Age just has more of everything. More societies. More cities. More arid lands. More areas to explore. More destruction. My biggest fear now is that future seasons of The Rings of Power may not get the same generous budget, knowing what enormous cataclysms are to come.

Writing on the show is peak television at its pinnacle. Prime has assembled an all-star fellowship of writers from the best shows on TV — Breaking Bad, Better Call Saul, Hannibal, Game of Thrones, and more. Absolutely no characters from the vast collective on this show feel cardboard, short changed, nor one-dimensional. Everyone quickly has motivations created and their place in society established. TV has never seen a character break as bad as Sauron, the lord of all the rings, and the pilot episodes set up the stakes for Middle-earth.

J.A Bayona was absolutely the right director to establish the look and feel of this show. From his water work with The Impossible to the dark tones of Penny Dreadful, Bayona captures the existential dread that Middle-earth may not know is coming. Showrunners J.D. Payne and Patrick McKay are living our collective fan dream overseeing this massive project. Their imaginations are reaching for the same great heights that JRR Tolkien famously attempted, yet still under the guardrails and guidelines he established. Tolkien envisioned filmmakers expanding his Legendarium with his “other minds and hands, wielding paint and music & drama” and these guys are up to the task. Having chatted with them many times over the last six months it’s clear that these other and hands are the right ones to continuing shaping the history of Middle-earth.

Fans may forget that Peter Jackson’s The Lord of the Rings was full of no-name actors. It was Orlando Bloom’s first work, Billy Boyd’s first movie, and the biggest job for the hundreds of longtime kiwi actors. Rings of Power continues that tradition of unveiling top talent on the global stage. These folks are future stars. All the recent discourse of how they look and talk — also things fans also complained about in 2001 — is put to rest the minute the show starts. There is no wink at the camera or in-your-face notice me going on. These performances live in Middle-earth, period. Tolkien’s source text allow for a very expansive visual canon which the filmmakers are developing with the highest of standards. All the fears fans have of this “looking like television” are proven invalid. Better than other space and superhero TV shows, this is Middle-earth looking exactly like it should: the proper continuation of a $6 billion franchise and most-awarded film series of all time.

Even if it’s not a continuation. We have covered the rights situation numerous times over the last 4 years on this site and on YouTube. Testament to loyalty to JRR Tolkien is the involvement of Simon Tolkien (the current elder family stateman) in the production of the show, and no less that 11 living Tolkien relatives showing up to the London premiere. It’s a privilege to have Royd Tolkien a longtime friend of TORn, but to have his family there at The Rings of Power premiere unlocked a feeling I didn’t know this franchise needed: full support of the sub-creator’s legacy, and a proper continuation of his life’s work. There’s a trust in the show there, now, that I didn’t know was missing.

I’m looking forward to the many debates fans will have, and we will have at TheOneRing.net, over the choices made by the filmmakers. I’m reminded of the TORn staff that walked out of The Two Towers theatrical opening, disgusted that Frodo and Sam were at Osgiliath with an unrecognizable Faramir. My favorite film of Peter Jackson’s The Lord of the Rings has its detractors and I respect their perspectives, and The Rings Of Power will undoubtedly generate similar debates that can only strengthen our love of Middle-earth. Maybe we should bring back RINGER REVIEWS so all us fans can share our assessment of each of the 50 episodes to come.

As I walked out of that first screening, and now a second one in London, my one word review of Lord of the Rings: The Rings of Power two-part pilot remains:

Huge thanks to all the teams at Prime Video that have supported the fans throughout this journey of creation, for inviting hundreds of fans to these free screenings around the world, for all the support at Comic-Con and DragonCon, and for all the friendly (sometimes intense) conversations as we shared the excitement for this show. Fans are happy to be seen, and will be very happy with the finished product.

Tune in every Tuesday at 8pm ET for TORn Tuesday LIVE with Clifford & Justin, and chat anytime on the TORn Discord at https://discord.gg/theonering

END_OF_DOCUMENT_TOKEN_TO_BE_REPLACED 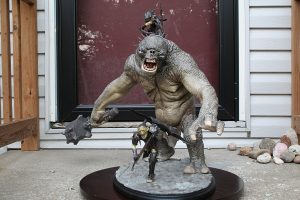