Over on The Gamer, there’s a great little backgrounder about the famous king of Rohan, Helm Hammerhand. It discusses his reign, key role in the events of the Long Winter and suggests he might just be “the most badass” character Tolkien ever wrote.

I’m not so sure on the last; any number of First Age elves might disagree (let alone the famously enthusiastic Morgoth-wrestler, Tulkas) but it’s certainly material for a good debate.

…it’s not killing Freca that gave Helm his name, it’s his solo missions behind Dunlending lines during the Long Winter. His people were besieged by weather and foes for five months, and Helm himself was gaunt and emaciated due to famine and grief for his son who was killed in battle. Despite this, Helm clad himself in white and stalked behind enemy lines “like a snow troll.” He would kill many foes with his bare hands during these raids, and legends spread about his abilities.

I also have to note that the author considers the presence of the Haradrim (and Mûmakil) a non-canon insertion for The War of the Rohirrim. As I outlined in a long article a couple of weeks ago, the appendices to The Lord of the Rings indicate that folk from Harad actually supported Wulf’s endeavours.

In the days of Beren, the nineteenth Steward, an even greater peril came upon Gondor. Three great fleets, long prepared, came up from Umbar and the Harad [my emphasis], and assailed the coasts of Gondor in great force; and the enemy made many landings, even as far north as the mouth of the Isen. [again, my emphasis]

Appendix A, The Lord of the Rings

Still, it’s a great read if you don’t know anything about Helm Hammerhand and want to look him up. Go check it out.

Thanks to Chen for the heads-up about the article. 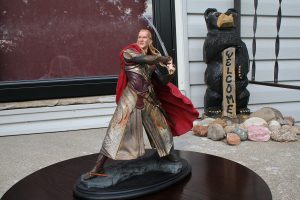 END_OF_DOCUMENT_TOKEN_TO_BE_REPLACED

Comic-Con 2018 is in the books, and if you followed us on Social Media you had a chance to see us share what was going on at our friends at Weta Workshop’s booth. Now that I’m back, I wanted to share all the pics I took of the wonderful things I saw at their booth. They had the jaw dropping (watch a recap of the Weta live video when they unveiled the new pieces) Master Collection Treebeard, new Balrog Bust, and the stunning Arwen on Asfaloth. All of these pieces were absolutely awesome and all may end up in my collection! The one piece we can all add right now is the Arwen on Asfaloth statue. She comes in with a price tag of $699 and an edition size of 750. However, fans will have to be patient until early 2019 to get her. In the meantime please enjoy the booth tour and various shots of what amazingness was at the Weta booth.
END_OF_DOCUMENT_TOKEN_TO_BE_REPLACED

If, like me, you’re a fan of the Rohirrim culture then this announcement is going to be something to make you smile. Fans can now add a statue of Gamling who during The Lord of the Rings: The Two Towers showed himself to be a loyal solider to King Theoden. Gamling did not travel alone though — fans can also add the Royal Guard of Rohan who we first meet as Aragorn, Gandalf the White, Gimli, and Legolas try to enter The Golden Hall. END_OF_DOCUMENT_TOKEN_TO_BE_REPLACED