As you all might be aware we’ve teamed up with our friends at Gemr to create a Collectors Club specifically for fans of Middle-earth. Things are going great, and so many of you are posting your items and collections. In celebration of how things are going, and to help get the word out even more, we’ve created a Middle-earth Giveaway of some pretty cool items ranging from a mini-Ringwraith from Weta Workshop to a XL Funko Treebeard. The contest runs from today May 29th to June 29th. Get signed up, show off your collectibles, and lets all Collect The Precious.

END_OF_DOCUMENT_TOKEN_TO_BE_REPLACED

As we posted recently, the folks at Funko have announced they’re back in the Middle-earth game, and they announced it with several pretty dang awesome The Lord of Rings Pops. San Diego Comic-Con is coming up in July, and virtually every company there has exclusives for the show. Funko announced today via their blog they would have something representing The Lord of the Rings. The Comic-Con 2017 Exclusive will be Aragorn and Arwen two pack. As of this posting there is no word on price or how these will be distributed, but as soon as we have that information we will update this post.
END_OF_DOCUMENT_TOKEN_TO_BE_REPLACED 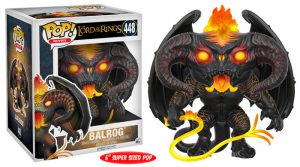