The first one comes today from Entertainment Weekly. The clip was shown – in abridged form – last night, during Evangeline Lilly’s appearance on The Late Late Show with Craig Ferguson. END_OF_DOCUMENT_TOKEN_TO_BE_REPLACED Itching for a little bit more of The Desolation of Smaug ahead of its December release? These new stills from the film have been up for a couple of days at EW – but in case you missed them, here they are for your viewing pleasure.

There are several new images of our beloved main characters, as well as many new ones joining the cast for the first time – including Bard (with his son Bain in tow), Thranduil, Tauriel, and some very fearsome looking Gundaband Orcs. END_OF_DOCUMENT_TOKEN_TO_BE_REPLACED To celebrate the 20th anniversary of Entertainment Weekly, we gathered 12 classic TV and movie casts for the ULTIMATE POP culture get-together. Classic Casts include: Back to the Future, Roots, Lord of the Rings, Pretty in Pink, Will & Grace, Alias, Northern Exposure, The Muppet Show, The West Wing, Gilmore Girls, Married with Children, and Scream.

Marc Bernardin from Entertainment Weekly writes: I will take any opportunity to see The Lord of the Rings in a full-blown theater, my love for those films is so great. Heck, I almost pilgrimaged to Austin to see it at the Alamo Drafthouse, where they’ll feed you whatever the Hobbits ate — while they’re eating on screen! (Hobbits eat rabbit stew, you eat rabbit stew. Hobbits eat lembas bread, you eat…Ritz crackers, probably. Hobbits gallivant on the bed, you sit uncomfortably in your seat.) More.. 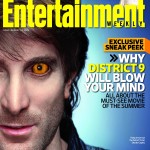 It has no stars, it was made for relatively little money ($30 million) by a 29-year-old South African-born director whom nobody’s ever heard of, Neill Blomkamp, and its action-packed plot is tinged with a surprising moral intelligence, but it may turn out to be the most unlikely sci-fi blockbuster of the season. It’s the most satisfying sci-fi thrill ride of the summer, but it also turns out to be sort of an apartheid allegory. R20;ItR17;s an utterly original film,” says District 9’s single A-list name, producer Peter Jackson (Lord of the Rings). R20;In an industry that’s looking to make movies out of every obscure TV show, or sequels, or videogames, you look at District 9 and it’s unlike anything you’ve ever seen before.” END_OF_DOCUMENT_TOKEN_TO_BE_REPLACED