Happy Father’s Day to all the Dads out there! A chance for Faramir, captain of Gondor, to give me a Father’s Day card…

Just wishing all our readers who are Dads – or who are the sons and daughters of Dads, so basically, everyone! – a Happy Father’s Day!  Who’s your favourite father in Middle-earth?  Sam Gamgee?  Elrond?  If only Treebeard hadn’t lost the Entwives, he could have made a great Dad!  And who can forget Denethor’s impeccable parenting skills….?

Let us know your favourite parenting moments from Middle-earth in the comments.  Hope everyone has a great day! Speaking on Richard Herring’s Leicester Square Podcast, the 55-year-old said: “I usually read scripts. But The Hobbit, I’m not sure I should say this, but I’ve never read The Hobbit. END_OF_DOCUMENT_TOKEN_TO_BE_REPLACED

The Pony: The Desolation of Smaug Welp, someone decided to mash-up the new teaser trailer for The Hobbit: Desolation of Smaug with My Little Pony: Friendship is Magic. With Shining Armour as Legolas and Princess Cadance as Tauriel, and Applejack as Bard (I looked them all up on the internet, honest), the result is too cute to overlook. The dragon looks pretty awesome too. END_OF_DOCUMENT_TOKEN_TO_BE_REPLACED

Posted in Fans, Hobbit Movie, Parodies, The Hobbit, The Hobbit: The Desolation of Smaug, Trailer

A couple of weekends ago, we dived into the big battle of The Two Towers as we discussed Helm’s Deep (Book III, Chapter VII) in Hall of Fire.

For those who couldn’t attend, here’s a log. And a reminder: tomorrow (Saturday June 15 at 6pm EDT) we’ll be moving onto the next chapter as we examine the events of The Road to Isengard. END_OF_DOCUMENT_TOKEN_TO_BE_REPLACED

Some breaking news via Stuff.co.nz. A huge cloud of smoke engulfed a Hobbit film set on the Miramar Peninsula when a generator caught fire.

Ed Scragg, who saw the fire from a Roseneath home on the other side of Evans Bay, said clouds of smoke engulfed a lighting tower on the set which has been built on land close to the old Mt Crawford Prison.

The lights went out and then came back on again, said Mr Scragg who said a number of fire trucks were seen racing to the scene. END_OF_DOCUMENT_TOKEN_TO_BE_REPLACED

Hall of Fire topic this weekend: The Road to Isengard

Throughout the War of the Ring there were several turning points, but among the most crucial to the downfall of Sauron was the battle of Helm’s Deep and the defeat of Saruman’s forces.

This Saturday, (July 15 at 6pm EDT (New York time)) the Hall of Fire crew invite you to join us as we discuss the downfall of Saruman, the wizard who would become the Lord of the Ring.

‘Welcome, my lords, to Isengard!’ he said. ‘We are the doorwardens. Meriadoc, son of Saradoc is my name; and my companion, who, alas! is overcome with weariness’ – here he gave the other a dig with his foot – ‘is Peregrin, son of Paladin, of the house of Took. Far in the North is our home. The Lord Saruman is within; but at the moment he is closeted with one Wormtongue, or doubtless he would be here to welcome such honourable guests.’ END_OF_DOCUMENT_TOKEN_TO_BE_REPLACED

No IMAX ‘The Hobbit: The Desolation of Smaug’ Trailer?

A few reports are coming in from fans that the IMAX screenings of ‘Man of Steel’ do NOT include a trailer for ‘The Hobbit: The Desolation of Smaug.’ These reports are unconfirmed. If you would like to guarantee you will get to the see the trailer on the big screen this weekend, we highly suggest calling your local theater and speaking with an employee. Feel free to post your findings in our comments below! Happy Trail…ering!  (oh that was lame)

Posted in Hobbit Movie, The Hobbit We’ve known for a while that there would be an Extended Edition of The Hobbit: An Unexpected Journey – Warner Bros.’ press release back in March, at the time of the release of the Theatrical Edition DVD and Blu-ray, said that the Extended Edition would be ‘available just in time for the holidays’. Now we’ve learned that this extended cut has been given a rating by The Motion Picture Association of America. Their bulletin (seen here) gives the movie the same rating as it had in theatrical release, PG-13. But here’s the interesting part – in theatres, the PG-13 rating was for ‘intense fantasy action violence and frightening images.’ Here’s what the rating says for the extended version:

‘… and fleeting nudity.’ Now that is something to ponder. A glimpse of the dwarves wrecking Bilbo’s bathroom? A scene where Bilbo leaves his house in such haste, he forgets more than his pocket handkerchief?! Being serious for a moment, what could this be? My best guess is some dwarvish high jinks; what do you think?

Thanks to ringer spies kirkempk and An anonymous Ringer for bringing this to our attention!

I think there is one possibility from The Hobbit that could fit the situation of fleeting nudity — when the Company bathe and wash their clothes in the Anduin after the Eagles drop them at the Carrock.

After that they stopped pleading. Then they took off their clothes and bathed in the river, which was shallow and clear and stony at the ford. When they had dried in the sun, which was now strong and warm, they were refreshed, if still sore and a little hungry. Soon they crossed the ford (carrying the hobbit), and then began to march through the long green grass and down the lines of the wide-armed oaks and the tall elms. Today, our friends at The Bridge Direct have revealed the final look of their 2013 Comic-Con Exclusive figure! As you may remember, last year they did a 6″ Invisible Bilbo Baggins figure, as he would look while wearing the Ring. Well, this year they are bringing to fans a 7″ version of one of the coolest looking characters from The Hobbit: An Unexpected Journey: Azog the Defiler. Azog comes with multiple switch out parts, in order to create him as we see him from ‘The Battle of Azanulbizar’, still with his left arm and holding King Thror’s head. You can also have him as we see him a little later in the film, no long having his left arm but with that gruesome metal object in its place. Azog will be limited to 2600 pieces world-wide, so he’s sure to go quickly. So if you’re at Comic-Con this year make sure you stop by the Weta/The Bridge Direct booth 3513B! Guillermo del Toro not credited as a screenwriter in DoS trailer

If, like us, you have been repeatedly watching the new The Hobbit: The Desolation of Smaug trailer over the last couple of days, you may have noticed something surprising at the end.  In the second screen of credits, right after Tolkien’s name, the screenwriters are credited: ‘Screenplay by Fran Walsh & Philippa Boyens & Peter Jackson’.  That’s it; unlike in the credits for An Unexpected Journey, Guillermo del Toro is not credited as a screenwriter for this second movie.  (Not in this trailer, at any rate…)

What this means is anyone’s guess.  We know of course that del Toro worked long and hard on the screenplays for the movies when he was in position as the films’ director.  At that time the plan was for only two movies; it seems hard to imagine, however, that it would be possible to extricate del Toro’s contributions to the scripts to such an extent that it could safely be said that he had NO hand in the screenplay for Desolation of Smaug.  Further, del Toro suggested that he would continue to be a part of the screenwriting even after he had left the movies as director; he wrote on TORn’s messageboards, ‘The writing team of PJ,FW,PB and myself will keep moving the screenplays forward.’ (See his post here.)

Perhaps it is simply that the film makers were only contractually obliged to acknowledge del Toro’s contributions in the credits for one movie; movie studios are sticklers for what’s in the contract!  Perhaps del Toro himself asked only to be credited in the first movie – wishing the role he played to be acknowledged but also perhaps wanting to move forward from the project, having made that very difficult decision to leave Middle-earth behind.   Perhaps, as for An Unexpected Journey, he will be credited at the end of the movie as ‘Project Consultant’.  Perhaps he will again be credited as a writer on the third movie, There and Back Again.  We’ll have to wait and see; meanwhile, it’s just one of those things which make you go, ‘Hmmm….’

Posted in Guillermo Del Toro, Hobbit Movie, Production, The Hobbit, The Hobbit: An Unexpected Journey, The Hobbit: The Desolation of Smaug, Trailer The big week in Middle-earth continues today, with a brand new product from the folks at Gentle Giant.  Following up the massive Goblin King bust is another bad guy from The Hobbit: An Unexpected Journey: the pale Orc himself, Azog the Defiler, will be the next bust for sale from Gentle Giant. Azog comes in at nearly 7″ tall, with a price tag of $85 for non-PGM members and $76.50 if you’re a PGM member. You have time to save the coin, with Azog not shipping until the first quarter of next year. You can pre-order Azog right now directly from Gentle Giant’s website. 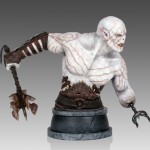 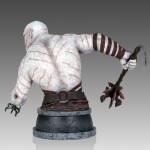 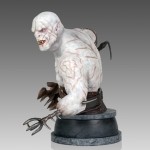 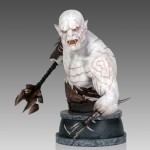 The Russian publisher Sezonoj has just published a reprint of the second edition of La Hobito, world famous work by J.R.R. Tolkien, as the ninth volume of the Mondliteraturo series of books. END_OF_DOCUMENT_TOKEN_TO_BE_REPLACED