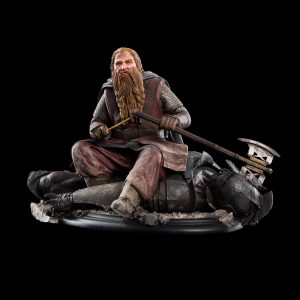 Our friends at Weta Workshop have two new items that you just may want to add to your collections. The first is from one of my favorite lines, allowing collectors with limited space a chance to add some of their amazing items. Their mini-statue line is absolutely fantastic, and the next character joining the ranks is Gimli. Fans can add to their collections Gimli after the long battle of Helm’s Deep, letting Legolas know that he killed 43 Uruk-hai. Gimli is currently in-stock and can be yours for $125 (USD). END_OF_DOCUMENT_TOKEN_TO_BE_REPLACED If you’ve been collecting statues from Weta Workshop for as long as I have, you have a mental list of things not yet done that you hope do get done. This week’s new release brings us one of the iconic moments from The Lord of the Rings: The Two Towers. As we see Gandalf, Aragorn, Legolas, and Gimli ride up to Edoras, and Lady Eowyn comes barging out of The Golden Hall in the beautiful white dress. This moment has been screaming to get a statue made since the film came out in 2002. This week, that long wait is over and we can now place orders for a statue capturing this breathtaking moment, including those very cool Rohan flags flying in the breeze. Coming in with an edition size of only 750 pieces and a price of $275, this statue is sure to go fast. Fans will also be responsible for a $50 deposit at the time of purchase.

Now, after all the ping pong balls have landed, we’re happy to announce the 10 lucky fans who will be getting a copy delivered to their doors. There are 6 winners from the United States and 4 winners from other areas of the globe. We want to thank HarperCollins for allowing us to give these away and for including the Ringers who don’t live in the United States. END_OF_DOCUMENT_TOKEN_TO_BE_REPLACED