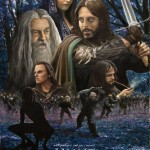 Poster artist Paul Vicenti has written in with news on fan film, “Hunt For Gollum” at DragonCon where TheOneRing.net will also be presenting a panel (twice) on the very latest news on “The Hobbit”.

He writes: ” ‘The Hunt for Gollum’ will have it’s East Coast (US) premier at the Dragoncon Film festival this coming labor day weekend. Currently at over 3 million views online, this is a chance to see it as it should be seen- BIG! It is slated to show during the 10 AM screening block on Sunday morning September 6th. Though the actual filmakers will not be there, I will be representing the film ( I was one of the poster artists – see attatched) and will be happy to meet with and discuss the film with any interested parties.

I am sure all LOTR fans attending Dragoncon would appreciate a bit of notice, so they can fit it into what promises to be a very busy weekend indeed! END_OF_DOCUMENT_TOKEN_TO_BE_REPLACED

Fans of the Lord of the Rings who have not yet had their fill of cinematic Middle-earth should make a date for Sunday 3 May at 4pm (UK time), when the internet and the Sci-Fi-London festival will simultaneously host the premiere of The Hunt for Gollum – a “film for fans by fans” knocked together for just 3,000 quid. According to the BBC, the film is set between The Hobbit and the Fellowship of the Ring, and “tells the story of Aragorn as he sets out to discover the truth about the Ring”. Writer and director Chris Bouchard explained that, with the blessing of Tolkien Enterprises (as long as the project was non-profit, natch), he set about recruiting a vast cast of volunteers – including 160 credited crew and 60 who worked on visual effects alone. LoTR fan film set for net premiere

Simon Vozick-Levinson writes: I have no clue how The Hunt for Gollum has gotten past New Line Cinema and the J.R.R. Tolkien estate’s intellectual property lawyers. Nor do I care, because this “by fans, for fans” non-profit 40-minute Lord of the Rings tribute film looks awesome. As far as I can tell from the trailers, the plot, adapted from part of Tolkien’s voluminous appendices, is supposed to take place some time between The Hobbit and The Fellowship of the Ring. EW Talks ‘The Hunt for Gollum’

The folks at Dailymotion send this in: On May 3rd (a week from Sunday), “The Hunt for Gollum” will make its debut on video sharing site Dailymotion. This high-production value, 45-minute film was a labor of love, produced by entirely by fans of the Tolkien trilogy on a volunteer basis over the past 2 years. Inspired by notes in the appendices of the book, the film follows Aragorn as he sets out to find the creature Gollum and discover the truth about the Ring.

The film will be available for streaming free of charge beginning May 3rd, but you can get a sneak peak now by viewing the trailer here. END_OF_DOCUMENT_TOKEN_TO_BE_REPLACED

Chris writes: I just wanted to let everyone at TORN know that our final trailer two for The Hunt For Gollum has been released, which you can check out on our new website. Hope you enjoy it. I’m just now putting the finishing touches to the film which will go live as planned on May 3rd for free streaming in HD. Trailer Two for ‘The Hunt For Gollum’ Released

Chris Bouchard writes: Just wanted to give you advanced notice that The Hunt For Gollum will be released on May 3rd 2009 for online free streaming in HD. Thanks for supporting this ambitious fan film!

‘The Hunt For Gollum’ is a ‘Lord Of The Rings’ Fan Film made by fans for fans. Inspired by notes in the appendices from ‘The Lord of the Rings’ book, ‘The Hunt For Gollum’ follows Aragon as he sets out to find the creature Gollum and discover the truth about the Ring… END_OF_DOCUMENT_TOKEN_TO_BE_REPLACED