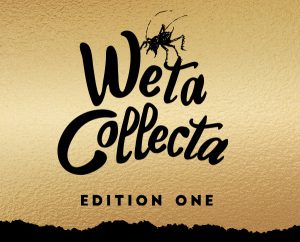 Our friends at Weta Workshop have an awesome new goodie called the Weta Collecta. This item contains a collectible from all the ranges of collectibles that Weta makes: t-shirt, and various mystery items. The coolest part about the box is that it’s a key to a chance to win a trip to Middle-earth. That’s right! By buying this box, getting some very cool items, and entering the contest attached to the box, you may well end up in Middle-earth. Before October 31, snap a photo with all your Collecta goodies, upload it to Collecta Contest, and you and a friend could be flying to Wellington, New Zealand, from anywhere in the world!
END_OF_DOCUMENT_TOKEN_TO_BE_REPLACED 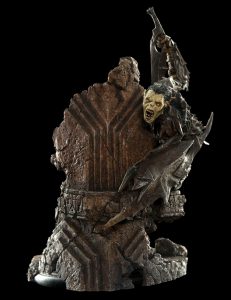 If space in your collection is at a premium then the mini line of statues from our friends at Weta Workshop has to be one of your go to lines. These great statues carry all the detail you expect from Weta Workshop but are scaled down into a smaller statue.

Tonight we get a new statue joining the line, this time from the bad guy side of Middle-earth. As the Fellowship made its way through Moria, Pippin set off a series of events and The Fellowship would have to face off against the Orcs of Moria. The Moria Orc mini depicts this Orc crawling on one of the beautiful pillars in Moria.

Fans who want to add this Orc can do so as he is currently in-stock and can be had for $125. Also, as you all know Weta has been running a contest for their uber cool 1:30 Dol Guldur signed by Richard Taylor, Leonard Ellis, and Dave Tremont. This contest has just seven days left and all the questions are now posted. Make sure you enter the 1:30 Dol Guldur Signed Set before it closes August 31st.

END_OF_DOCUMENT_TOKEN_TO_BE_REPLACED

From stuff.co.nz: Peter Jackson along with fellow Oscar winner Jamie Selkirk stepped down from Sir Richard Taylor’s Miramar workshop on December 31, Companies Office documents show. The change comes ahead of new legislation which would make directors personally liable for health and safety, which the Institute of Directors said demonstrated that directors needed to be across all aspects of the business. Jackson and Selkirk both still own about one third of Weta Workshop.

Weta Workshop senior communications manager Erik Hay confirmed the law change was behind the move for Jackson and Selkirk. “The reason was centred around the law change, which will require them to be more involved on a daily basis. As a manufacturing business, it’s important they are. Peter felt he was not and decided to step out of the piece. They will still retain shares in the company.” Read more…