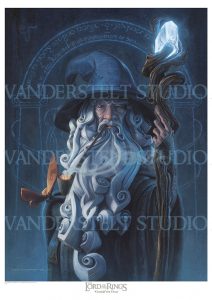 As we previously teased about here on the front page, as well as on our various social media footprints, the Gandalf the Grey Mini Epic art print was set to be coming soon from our friend, Jerry Vanderstelt. Yesterday this went live, and is now available to all collectors. Fans can get this in paper giclee (18×24) all the way to canvas giclee (24×32). Depending on the size you go with, the cost will be $80 for the 18×24 paper giclee, $165 for the 24×34 giclee, and if you go for the canvas, a price of $435. No matter what you choose you’re getting some of the absolute best art out there.

END_OF_DOCUMENT_TOKEN_TO_BE_REPLACED 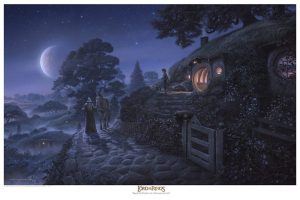 One of the best artist out there Jerry Vanderstelt is back with a beautiful new landscape print capturing Bag End in such a fantastic way. Not only that but you get Gandalf and Frodo about to have what may be a very important conversation in the quiet of Hobbiton. This superb print is available in both Giclee for $80 and canvas for $225, with other options available at checkout. The cherry on top of this print is that it is in stock, so there is no wait to getting it. Make sure to grab this print, as Jerry’s work is among the best you will find when it comes to anything Middle-earth.
END_OF_DOCUMENT_TOKEN_TO_BE_REPLACED

END_OF_DOCUMENT_TOKEN_TO_BE_REPLACED

Did Tolkien mean for Old Toby to be 4/20 friendly?