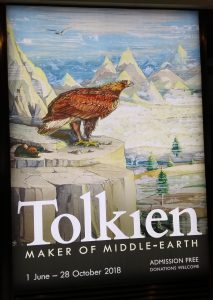 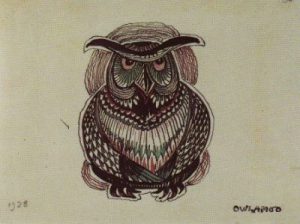 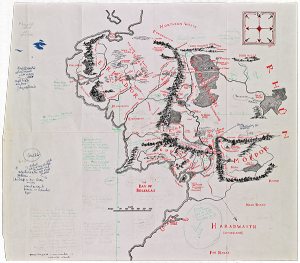 The Bodleian Library in Oxford has an exceptional exhibition coming up later this year, which fans will no doubt travel far and wide to see. Tolkien: Maker of Middle-earth (June 1 – October 28) will display an extraordinary collection of illustrations, manuscripts, letters, personal belongings and more, giving a unique insight into J.R.R. Tolkien and his works. This ‘once in a lifetime’ exhibition is not to be missed – and thanks to our friends at the Bodleian, TheOneRing.net can reveal exclusively that tickets will be available from 2pm UK time tomorrow, Tuesday 13th February. Here’s what the Bodleian tell us:

The Bodleian Library is pleased to announce that free tickets for the upcoming, once in a lifetime exhibition, Tolkien: Maker of Middle-earth, will be available for booking from 2pm UK time on Tuesday 13 February 2018. We know that some visitors will want to travel some distance to this exhibition and want to help them ensure their entry in advance.

To book your tickets, visit the official Tolkien: Maker of Middle-earth website at https://tolkien.bodleian.ox.ac.uk/about-the-exhibition where they will be available from 2pm on Tuesday 13 February 2018.

Tolkien: Maker of Middle-earth explores Tolkien’s amazing legacy from his genius as an artist, poet, linguist, and author to his academic career and private life. The exhibition takes you on a journey through Tolkien’s famous works, The Hobbit and The Lord of The Rings, displaying an array of draft manuscripts, striking illustrations and maps drawn for his publications.

Visitors will discover Tolkien’s early abstract paintings from The Book of Ishness, the touching tales he wrote for his children, rare objects that belonged to Tolkien, exclusive fan mail, and private letters.

The exhibition runs 1 June to 28 October 2018 at the Bodleian Libraries, University of Oxford.

If you’ve been thinking about making a pilgrimage to Oxford, this summer/autumn is the time to go; and be sure to grab those tickets tomorrow! Check out the exhibition website, here.

Thanks to the Bodleian Library for allowing us to make this announcement.

END_OF_DOCUMENT_TOKEN_TO_BE_REPLACED

Many of our readers will be familiar with the superb work of artist Donato Giancola, whose stunning paintings have graced the covers of many books, including editions of both The Lord of the Rings and The Hobbit. He’s a good friend of TORn’s, and some of you may have met him at one of our ‘Ringers Take Manhattan’ parties.

This weekend, Giancola will be appearing as Artist Guest of Honour at GenCon in Indianapolis. He’ll also be appearing at New York ComicCon in October. He has recently completed a fabulous new work set in Middle-earth: The Fellowship in Hollin.  Here’s what Donato had to say about creating this landscape:

END_OF_DOCUMENT_TOKEN_TO_BE_REPLACED 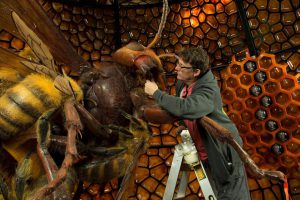 Aussies watching the ABC’s News Breakfast show would have seen the exciting news that Weta Workshops latest project is opening today in Melbourne.  This latest project, Bug Lab: Little Bugs, Super Powers,  is a giant-sized exhibition focused on all things creepy crawly.  Anyone familiar with LOTR and the Hobbit will have no doubt how effective these creepy crawlies will appear.  The exhibit consists of six giant replicas and aim to give visitor an up-close view of the micro world beneath our feet.

END_OF_DOCUMENT_TOKEN_TO_BE_REPLACED 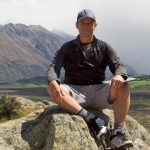 Daniel  has just announced the exciting news on his official Facebook page, that his first solo exhibition is on at the Kapiti Gallery from 15 February until March 19, 2017.  The exhibition will showcase his current work and work from The Lord of the Rings, The Hobbit, and The Lion, the Witch and the Wardrobe.