Award-winning composer Chance Thomas’s work should be familiar to anyone who’s played the Lord of the Rings Online Games: Shadows of Angmar and Mines of Moria. Those are just two examples in an impressive resume. His latest collaboration with LOTRO and Warner Bros. Entertainment is the soundtrack to the new online game Riders of Rohan, releasing September 5, 2012. Posted on Lord of The Rings Online’s YouTube site are three musical selections: “LOTRO Legacy”, “Shadow of the Argonath” and “Boromir’s Last Stand”. Be sure to click on “Show more” on the individual pages for “Shadow of the Argonath” and “Boromir’s Last Stand” to read Thomas’s insight into the composing of the music.

Additionally, the second in the series of behind the scenes videos: “Immersion through the look and sound of Rohan”, posted July 5th, has interviews with Thomas as well as Director Mitch Cohen, Director of Photography Scott Kevan and Senior World Designer Chris Pierson. The composer speaks to how he relied on painstaking research of the literature to create what he feels is “authentic” and true to Tolkien’s vision of the role of music in his stories. This video along with the first behind the scenes and various teasers and trailers for the game are available at LOTRO’s YouTube page. More musical tracks will be posted as the launch date approaches. In the meantime check out Chance Thomas’s official site to hear examples from some of the composer’s other works. Three new Skirmishes erupt from the depths of Moria. Beyond the barriers of the 21st Hall, in the nighted gulf of the Deepway, and along the Way of the Smiths, defend the brave dwarves of the Iron Garrison from the hordes of Mazog. These Skirmishes are waiting for you to test your mettle and hone your skills whenever the call of battle sounds. END_OF_DOCUMENT_TOKEN_TO_BE_REPLACED

From our friends at LOTRO: A new digital expansion for The Lord of The Rings Online has been announced today. The new expansion, entitled “Siege of Mirkwood”, will bring the culmination of the epic storyline that began with the Mines of Moria, or more specifically bring the game to Book II Chapter 9, and will include the Epilogue as well. In addition to the story content, the expansion will bring a level cap bump to 65, introduce a new 12 man raid, and a smattering of three to six man instances.

“Seige of Mirkwood” will be available in the fall (just around the corner). In the mean time, check out the cool intro here. 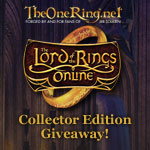 TheOneRing.net and The Lord Of The Rings Online are celebrating the game’s second birthday by giving away ten “Collector’s Editions” and entering couldn’t be easier. This edition of the game includes 30 days of free game play, both complete volumes of the game (Shadows of Angmar and Mines of Moria) in-game tokens, a gold-plated One Ring replica, a Mines of Moria map, a poster, a LOTRO art and music collection and a Collector’s Edition Starter Guide. What a great birthday mathom! Enter the contest and learn more about LOTRO [Contest Page] [LOTRO official site]

“The Lord of the Rings Online,” launched two years ago, gives players a chance to explore first-hand, a gaming interpretation of Middle-earth. TORn checked in with three of the individuals behind the game: (Jeffrey Steefel, LOTRO Executive Producer; Harry Teasly, LOTRO Art Director for LOTRO; Adam Mersky, Director of Communications for parent company Turbine) to talk about the game’s past and its future. There are several promotions in place right now for the game, lots of game details at the end of the article including an exclusive giveaway for TORn readers!

For two years now, via a home computer, you can walk and run around Middle-earth (and LOTRO always correctly uses the lower-case “e” in earth, a good sign) and experience the sights, sounds, races, spaces and dangers of Tolkien’s fictional creation during the time of his “Lord Of The Rings,” books. END_OF_DOCUMENT_TOKEN_TO_BE_REPLACED