Trying to make Comic-Con a bit more Tolkien-centric, and to have a little extra fun and the world’s biggest celebration of pop-culture, we (TheOneRing.net) brought in the crowds at Comic Con in San Diego for a fun competition. With no space at the convention to call our own, we went to Weta for an assist and they provided a perfect setting to hold a “Voice of Gollum,” contest.

A collection of fun-loving convention attendees and some awesome Gollum impersonators stepped in front of the Slaveboy Films’ cameras and impressed TORn, Weta and everybody stopping to look on. We asked Weta to choose the best entries, and the guys at Slaveboy Films have put together a fantastic video of the Top Ten.

Weta has also agreed to donate 20 Weta Dollars (worth US$20 dollars) to each of the Top Ten entries. Now it’s your turn. Weta are going to assist TORn with the voting. Out of these 10 masterful impersonators, only one can be said to possess the true voice of Gollum and therefore be allowed to take home a swag-bag of extra goodies; a TORn T-shirt, a Weta T-shirt, 30 more Weta Dollars, a Weta keyring and a Lord of the Rings Location Guide book. Who is it going to be? Vote Today!

After all, he had 40 or so of us delighted to be trapped in a room with him in a small but luxurious hotel a few hundred meters from the convention center where the world’s biggest celebration of popular culture was taking place. It was the end of the first day of the four-day event and Jackson had swooped into town, showed off his first ever public screening of “District 9,” and then convened Geek Court. END_OF_DOCUMENT_TOKEN_TO_BE_REPLACED 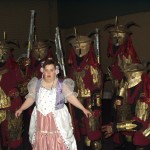