When Kate Madison’s fan prequel to the Lord of the Rings, Born of Hope, was released in December 2009 it instantly raised the bar for fan film productions and was hailed as an accomplished and in every respect a worthy addition to Peter Jackson’s trilogy.

Three years and 23 million online views later Kate has revealed that she is now planning to raise the bar for fantasy web series.  “Web series have become a popular and important way for independent filmmakers to showcase their work and compared to a film, the potential for shaping an on going story line for, and with, the fans is really appealing”.

Ren is the story of a young woman, who lives a quiet life in a small village until her face is branded by a powerful ancient spirit and she becomes feared by all who see her.  Dramatic events, involving the ruling warrior order of the Kah’Nath, force her to leave her safe existence and journey across the land to find the truth behind the web of lies she’s believed in all her life.

“The first season will consist of 6 ten minute episodes and is scheduled to go into production in the next few months.  It’s so exciting to be creating a brand new fantasy world and I’m already working with concept and story artists to brainstorm what the next season could bring” says Kate.

The inspiration for the show is rooted in great fantasy stories like The Lord of the Rings, but epic books and TV series like Game of Thrones and the more lighthearted Legend of the Seeker have also influenced the creation of REN. One of the most important features of Born of Hope was the fan base that helped finance, design and even act in the film and we are keen to involve the fans even more in this project. The series is in the very early stages, with only the first season written, so we will look to the online fan community to influence what happens… and yes, even be in it!

Kate needs your help to get the show off the ground and has launched a Kickstarter campaign which runs until the 19th August.  There are some great rewards to getting involved and she is releasing exciting updates throughout the campaign.

END_OF_DOCUMENT_TOKEN_TO_BE_REPLACED

PJ writes: BBC Radio interviewed Kate Madison about her prequel “Born of Hope.” The interview is between minutes 14:00 and 18:00 here.

NEW YORK–(BUSINESS WIRE)–Dailymotion today announced that “Born of Hope,” a professionally-produced feature-length film based on the Tolkien Trilogy, Lord of the Rings, will be screened on the popular global video entertainment site beginning December 1, 2009. This exclusive follows the high successful launch of another Lord of the Rings fan film, The Hunt for Gollum, in May of 2009.

“Born of Hope” tells a Tolkien-inspired original prequel story with a host of characters never before seen on screen. The 70 minute prequel is the story of Aragorn’s parents, Arathorn and Gilraen, along with the characters who sacrificed everything to keep Aragorn safe. More.. 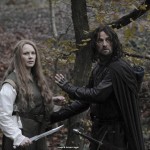 Press Release: For fans of Tolkien this Christmas is going to be special. For the first time in six years you can enjoy a seriously professional Lord of the Rings inspired feature film – and not only that, you can watch it for free!

Born of Hope is a genuine attempt to tell a new Tolkien story boasting a host of characters, which have never been seen on screen before. Released exclusively on DailyMotion.com on the 1st of December, this UK based 70 minute prequel is the story of Aragorn’s parents, Arathorn and Gilraen, and the people who sacrificed everything to keep him safe. END_OF_DOCUMENT_TOKEN_TO_BE_REPLACED

TA Widman sends this in: I don’t know if anybody over at TORN knows about this yet, but another fan film is being produced to be premiered at Ring*Con 2009 and then streamed online, like Hunt for Gollum. “Born of Hope” is set before the War of the Ring, focusing on the story of Arathorn and Gilraen as well as the birth and childhood of Aragorn. It is a 60 minute film, being produced in the UK. On their site, they’ve posted a teaser trailer, and many stills. www.bornofhope.com