The 2009 DragonCon schedule promises to be interesting and fun and features John Noble, a list of speakers and even TheOneRing.net. The event takes place annually, this year September 4-7, in a series of hotels in downtown Atlanta, Georgia. You can read details about the convention here and all the details of the Tolkien programming right here. TORn is scheduled to present an unauthorized look at everything we know so far about the production of ‘The Hobbit’ films and then present for discussion many of the things still open for speculation just as official pre-production begins. 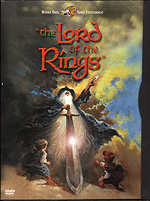 In addition to being a world renowned author, Peter S. Beagle wrote the screenplay for the 1978 animated LORD OF THE RINGS, directed by Ralph Bakshi. Conlan Press has acquired what Warner Brothers insists is the *very last* available DVD stock of the movie. There are exactly 573 copies in this stash, and according to the distributor there are no current plans to re-release the title.

The normal Conlan Press price for a personalized signed copy of this DVD would be $30. To celebrate TORN’s anniversary, however, they are dropping the price to $20 from now through midnight (Pacific time) this Sunday, April 29th. If you want to get one before the price goes back up, go to www.conlanpress.com click on the bright blue ORDER button at the left of the screen, and scroll down to select this special title. Please note: more than half the purchase price goes directly to benefit Peter.

Thank you Peter, and Connor at Conlan Press, for this very special offer.

Doug Adams has just announced that the release of his book, “The Music of the LOTR Films”, will be tied in to ‘another major release’. The downside is they are no longer considering November, 2008 as a potential release date. The upside, however, is that the whole project will take on a larger scale. Doug writes:

Deluxe just got deluxe-er… again… heck, even standard got deluxe-er this time! Oh, and if you’re still not convinced, let it be noted that you’re also likely to get significantly more unused music in your hands this way. Yes, I said “significantly.”

The intriguing question that remains is, what is this other ‘major release’? Let the speculation begin.