Kilar became known internationally as the author of dozens of film soundtracks such as Roman Polanski’s The Pianist, Jane Campion’s The Portrait of a Lady, and Francis Ford Coppola’s Bram Stoker’s Dracula. He also composed symphonic music, chamber works and works for solo instruments.

He was also, for a time, a frontrunner to compose the score for Peter Jackson’s The Lord of the Rings films. END_OF_DOCUMENT_TOKEN_TO_BE_REPLACED

The book is a thirty-two-page catalogue that chronicles the world of Doctor Grordbort. Inventor extraordinaire, Dr Grordbort has a gadget for everything, and in this meticulous catalogue of weaponry, he showcases a world where chivalry is not dead, advertising is beautiful, and rayguns look too pretty to be lethal.

Inside the book you will find the shiniest new bifurnilizers, metal manservants, and automated travel loungers. Also included for entertainment and scientific education is a compartmentalised picture story (some call them comics) of the world-famous naturalist, Lord Cockswain.

Written and illustrated by Weta Workshop conceptual designer Greg Broadmore, Doctor Grordbort’s Contrapulatronic Dingus Directory showcases dozens of arcane inventions and contraptions. “As a kid I was massively inspired and awed by the black-and-white serials on Sunday afternoon TV, in particular the 1930s Flash Gordon and the many sci-fi movies of that era,” says Greg. “This book allowed me to pay homage to that world of science fiction and create something new at the same time. And it’s full of guns, did I mention guns? Rayguns actually, the best type.”

The stars of the show are, of course, Doctor Grordbort’s Infallible Aether Oscillators, the unique range of Rayguns available to purchase via www.wetanz.com/rayguns.

This hardcover book will be available in January 2008. Pre-ordering of the comic is now open to Weta VIP clients via www.wetanz.com/rayguns.

I spend a fair bit of time pondering the imponderables (that’s why it takes time) of fantasy imagery.

Fantasy imagery has been happening for a long time. In fact no culture, ever, has created ONLY realistic, down-to-earth, day-to-day and otherwise familiar imagery. Everything we set our eyes upon is deified, vilifeid, praised or ridiculed, or, with surprising regularity, sublimated by our desires and aspirations. Hence our dawning century of fantasy art, with little fantasy artists scattered the world over, who peer into looking glasses darkly Alice-fashion, hoping for a glimpse of the invisible, a hint of the ineffable, in the hopes of transcribing the sparkle of that particular glamour on paper/canvas/screen.

Sometimes it seems a shame we don’t build any more temples to Poseidon or Odin or commission artists to decorate the entrances to sacred groves or sculpt pillars for Irminsul. Of course, we can’t any more, at least not with a straight face, not with the scientific age disputing monotheisms for our attention and belief. Serious business, that, and not to be tampered with. So fantasy has packed its gypsy tricks in its tatterdemalion cloak and gone a different road, into make-believe.

Perhaps that’s where the saving grace of all this lies. It’s not entirely serious. Because from our extraordinary viewing platform we can see stars for real, poke around inside atoms and count all the numbers everywhere. Quite an accomplishment.

We can believe, often in the face of all evidence, often with grace and happiness, often simply with motions gone through, in whatever ultimate felicity or fate we inherit or choose. Quite a program.

Rather like a buffet – you know those salad bars, where you always try to cram too much on your plate? Sometimes opinions and beliefs to me feel just like that. Something we diligently or dutifully apply to our world rather than something we allow the world to offer because understanding is neither counting atoms nor having an exclusive on the truth. [More] 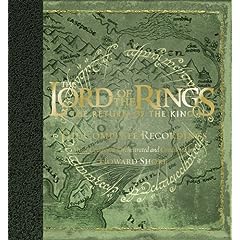 Magpie writes: The track titles at Amazon.de for the CR-ROTK are now listed. At this moment, I can’t find track titles at any other site (Barnes & Noble, Soundtrack.net, or Moviemusic.com). I don’t doubt these are right, but some lines are cut off an there’s probably at least one typo. I will extrapolate or comment on the list below.1. Roots And Beginnings
2. Journey To The Cross-roads
3. The Road To Isengard
4. The Foot Of Orthanc
5. Return To Edoras
6. The Chalice Passed
7. The Green Dragon [Featuring Billy Boyd]
8. Gollum’s Villainy
9. Éowyns Dream
10. The Palant’r
11. Flight From Edoras
12. The Grace Of Undómiel [Featuring Renée Fleming]
13. The Eyes Of The White Tower
14. A Coronal Of Silver And Gold
15. The Lighting Of The Beacons
16. Osgiliath Invaded [Featuring Ben Del Maestro]
17. The Stairs Of Cirith Ungol
18. Allegiance To Denethor
19. The Sacrifice Of Faramir [Featuring Ulrich Herkenhoff]
20. The Parting Of Sam And Frodo
21. Marshalling At Dunharrow
22. Andúril – Flame Of The West
23. The Passing Of The Grey Company
24. Dwimorberg – The Haunted Mountain
25. Master Meriadoc, Swordthain
26. The Paths Of The Dead
27. The Siege Of Gondor
28. Shelobs Lair
29. Merrys Simple Courage
30. Grond – The Hammer Of The Underworld
31. Shelob The Great
32. The Tomb Of The Stewards
33. The Battle Of The Pelennor Fields
34. The Pyre Of Denethor
35. The Mûmakil
36. Dernhelm In Battle
37. A Far Green Country
38. Shieldmaiden Of Rohan
39. The Passing Of Théoden
40. The Houses Of Healing [Featuring Liv Tyler]
41. The Tower Of Cirith Ungol
42. The Last Debate [Featuring Sissel] (this is probably Sissel’s Song from the ROTK EE Fan Credits restored for some previously intended scene. I’m not sure, at the moment, what scene this would be.)
43. The Land Of Shadow
44. The Mouth Of Sauron [Featuring Sir James Galway]
45. For Frodo [Featuring Ben Del Maestro]
46. Mount Doom [Featuring Renée Flemin g]
47. The Crack Of Doom
48. The Eagles [Featuring Renée Fleming]
49. The Fellowship Reunited [Featuring ??] (This must be a long track to include all that happens between the Eagles and the Grey Havens. I’m guessing the list would include James Galway, Renée Fleming, and Viggo Mortensen are in this track but there may be more.)
50. The Journey To The Grey Havens
51. Elanor [Featuring Sir James Galway ] (I have no idea what this is.)
52. Days Of The Ring [Featuring Annie Lennox] (but I don’t know if this contains Into the West or if Into the West would be in track 50 and this is something else. I could contain the song Use Well the Days. The track title might be a typo for “Days of the King”.)
53. Bilbos Song – (This is the final song heard on the ROTK EE Fan Credits. It is an Elvish translation of “I sit beside the fire and think” and is sung by a boy’s choir. It is exquisitely, almost painfully beautiful and was written just for this spot by Howard Shore as a thank you and goodbye to the fans.)
Posted in: Share:

Under whelmed with the quality of the last Harry Potter film, we have decided that no one other than Peter Jackson has the skills necessary to make Harry Potter and the Deathly Hallows the film it deserves to be. We’re using the commenting function at the bottom of the article (here) as an online petition and we hope to get lots of names signed up.

Obviously we don’t expect Jackson to actually direct the film, but we thought this would be a fun event that could get people talking and dreaming about how great a Jackson directed Potter film would be.

The (Cult)u’re Magazine editorial team has had a great time talking about this amazing pipe dream, and we’d love to spread the discussion out into the greater Peter Jackson online community. As the most respected Jackson site out there, we would love the support of Theonering.net. If you could mention the article on your News page, or somehow direct your faithful readers in our direction, that would be just wonderful!

We are big fans of your site, and we greatly appreciate your time and assistance!

While perusing the Special Edition of ‘Knocked Up’ on DVD my wife came across a little Orlando Bloom cameo in the ‘Finding Ben Stone’ mocumentary. This clip features Orlando Bloom in the lead role getting into a fight with the director.

Watch out for the language in this clip