Ringer TheHutt was recently at the 2017 Medieval Fantasy Convention in Germany. Lord of the Rings and The Hobbit actors Adam Brown, Sean Astin, Manu Bennett and David Wenham were among the many guests. Read on for TheHutt’s full report!

Medieval Fantasy Convention in Germany: a report from TheHutt

Readers following actors from The Hobbit on social networks might have noticed that some of them suddenly started posing with owls in front of picturesque medieval walls. No wonder: the atmosphere of the Castle Burg in the German town of Solingen is quite inviting for taking pictures.

Historical info: Castle Burg (“Schloss Burg”, literally meaning “Castle Castle”) was built in the 12th century by the Count von Berg. It was destroyed in the 14xx’s and then rebuilt in the 19th century. It is situated on a mountain over the river Wupper.

Everything began last year, when the young event company Epicon tried out a new concept on the convention market: a traditional convention combined with a Medieval market in an actual castle. The concept proved quite successful: not only did the first Medieval Fantasy Convention (MFC) have a great guest lineup, including John Rhys-Davies and Craig Parker from LOTR, but it also was different from standard convention-hall cons. There were some issues as well, but the organization team promised to address them for the next edition. So, we were wondering how MFC2 would turn out.

And we weren’t disappointed. The second edition of the MFC was bigger and better. First of all, the organization team decided not to rest on their laurels by inviting same actors again – there were no repetitions considering star guests at all. Indeed, the Middle-Earth fraction of the star guests was doubled. First of all, there was of the four leading hobbits from the LOTR trilogy, Sean Astin (Sam). He proved to be extremely popular and had the longest queues for his autographs and photoshoots. The second LOTR guest was David Wenham (Faramir) – a great chance to see the Australian actor who rarely does conventions at all.

Wenham turned out to be a history and travel aficionado and was often seen strolling around exploring the castle. The Hobbit was represented by Adam Brown (Ori) who is well-known to the German audience by his many HobbitCon appearances. The British actor also enjoyed the unique Medieval atmosphere and had fun posing to occasional visitors from the castle’s window. Finally, the last Middle-Earth guest was Manu Bennett (Azog) – although he only was there for one of the event’s two days and spent all of it doing photo ops and signing autographs.

Guests from other franchises were intriguing as well. There were five guests from Game of Thrones: Tom Wlaschiha (Jaqen H’ghar, the Faceless man) was the most popular guest next to Sean Astin – no wonder for a German actor. Miltos Yerolimou (Syrio Forel, fencing teacher to Arya) was quite recognizable due to his bushy hair and a merry mood. Mark Stanley (Grenn, friend of Jon Snow) was quite a positive guy as well. The 19 years old Aimee Richardson (who played Myrcella in the first two seasons) was the youngest but could contribute many funny stories about the shoots (for example, she need two assistants to hold her dress whenever she needed to go to the toilet). The oldest guest was the legendary Julian Glover (maester Pycelle): the 82-year old Royal Shakespeare Company actor played innumerous villains in his life, including franchises like Star Wars, Indiana Jones and James Bond – and turned to be the sweetest gentleman in reality! Stars from other franchises included the two leads from Grimm, David Giuntoli and Bitsie Tulloch – a real-life couple who fell in love during their work on the series by watching The Sopranos together. Harry Potter was represented by Josh Herdman who played one of Draco Malfoy’s henchmen, Goyle – now a Mixed Martial Arts fighter. The last guest was Corin Nemec, a TV veteran best known for the show Parker Lewis Can’t Lose. So, the mixture of guests offered something for everyone. The actors were doing scheduled photo ops and Q&A panels; the rest of the time they could be found at their autograph tables, except when they went out for a stroll, exploring the premises.

And there was a lot to explore! The large open court right after the entrance was occupied by eating and drinking tents in medieval style. There was a good selection of food: from Alsatian “Flammkuchen” (tarte flambée, a thin layer of dough with crème fraiche, bacon and onions) and German bratwurst sausages to burgers and “Knight’s steak” (a bun with minced beef) or just crêpes. The “Mettaverne” offered not only mead, but also beer and wine, served in very stylish clay mugs. The same court was home to tents of some well-known cosplayers presenting their craft. For instance, Sascha Tanackovic (“Cosschmiede”) who is specializing in LOTR costumes. He was in Aragorn’s costume during the con, plus had several others on exhibit in his tent: Lurtz, Kili, a Haradrim warrior and many more.

Also, the same court, the open-air location for Q&A panels was situated (there was also a Plan B for rain: the museum room above the Knight’s Hall in the castle. Luckily, the weather was sunny on both days). Just as a reminder: the panels were the Achilles’ heel of the first MFC, as they were initially supposed to take place in a tiny Chapel of the castle. This time around, they had an open-air stage which was a great improvement. There were chairs in the front for VIP ticket holders; all other visitors had to stand behind. Unfortunately, they effectively covered the view from everybody else. On the other hand, the acoustics were okay, and one still could catch a glimpse of the actors. For the next time, the organization already announced to have a higher stage. 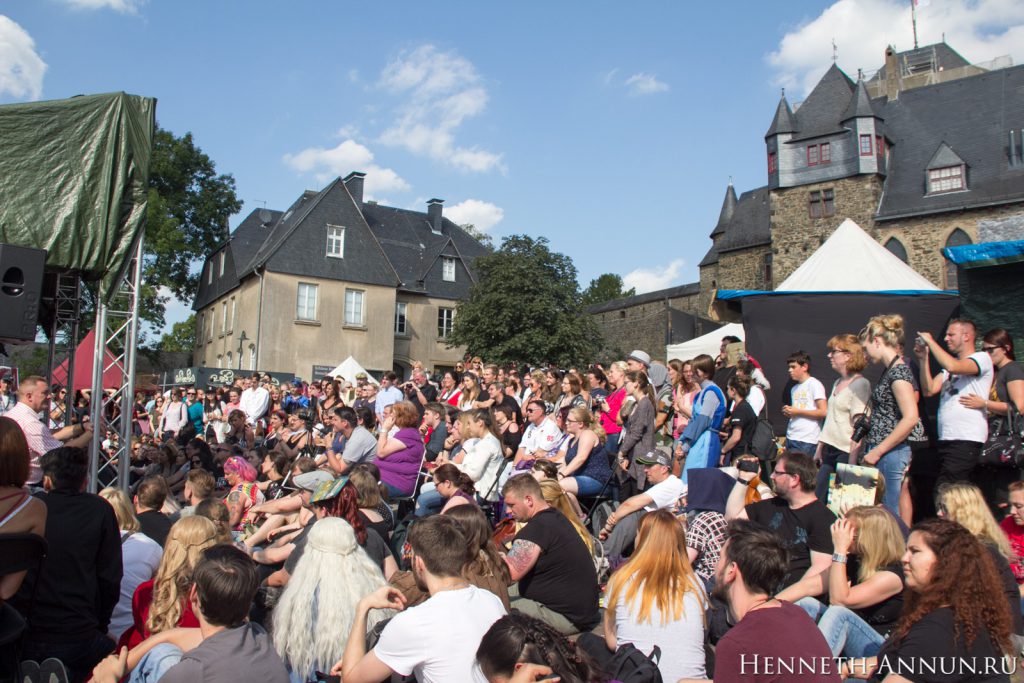 Both Middle-Earth panels were filmed (thanks to the Event & Concert Channel). Other panels can be seen here (link).

The exploring of the premises continued in the inner court. Aside from some Medieval dealer tents there was a really nice archery stand where one could learn to shoot a bow. There also was an archery competition for which one had to qualify by hitting the head of a troll two times out of three. The same court was used for the photo ops queue. This also has improved compared to last year (back then, it was constantly blocking the only entrance to the castle). This time around, the queue was organized along the wall, and the crew was letting small batches of people inside. This method proved to be quite successful: with 15 photo sessions a day and the large crowds of people wishing to take a picture with Sean, Manu or Tom, there were almost no delays in schedule. Though there still was room for improvement: the picking up of the photos took place one hour after the shoot at the organization booth, which led to somewhat chaotic scenes of crowds browsing for photographs in numerous boxes. 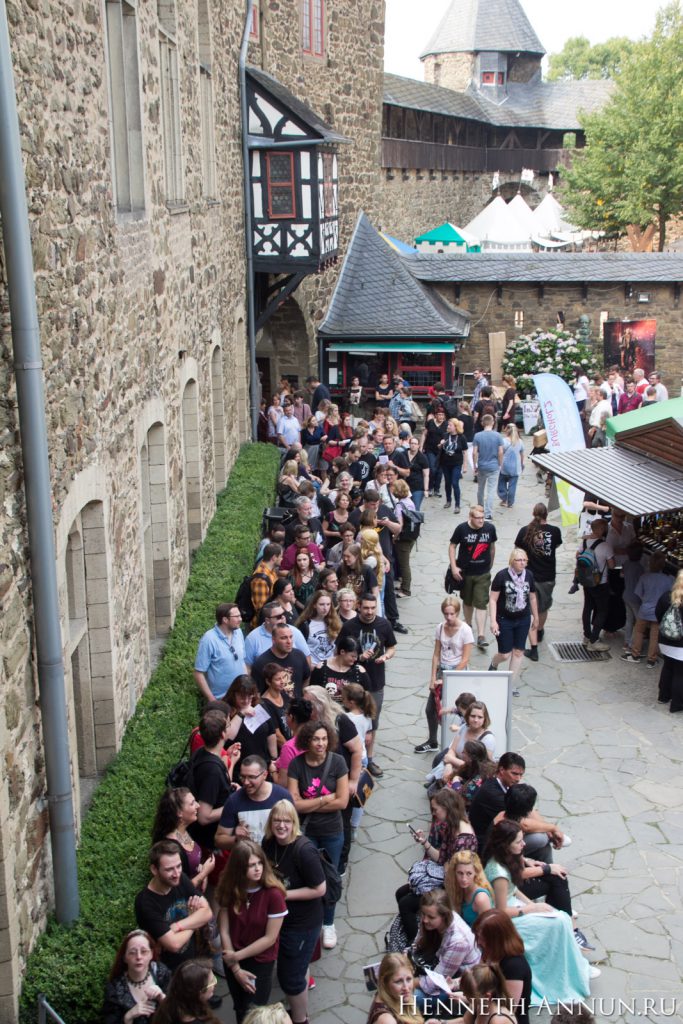 The next inner court was in character with the Medieval market thing: it was housing the reenactment group of “St. George’s Knights” with their own tents, food tables and fighting tournaments. They had to share the room for some dealer tents this year: for example, one could buy Medieval jewelry or handmade magic wands there.

The last little court was definitely one of the highlights of the event: it featured the falconry “Skyhunters In Nature” with their animals. They had hawks, screech owls, little owls and even an eagle owl! For a small fee, one could hold a bird to take a picture, and for a slightly larger fee, one could walk around with one accompanied by a falconer. This was a very popular tent, also among the actors: just take a look at Adam Brown holding a hawk!

The actors were situated in the castle itself. The large Knights’ Hall with decorated walls and columns was functioning as the autograph room. The most popular guests (Sean Astin, Tom Wlaschiha and Manu Bennett) had rope barriers for queues. Other actors were quite easily accessible if you wanted just to come up and have a chat. It was quite a pleasure to have a talk with David Wenham or Julian Glover about theatre. The only forbidden thing was taking selfies with the stars.

The next room, the Fireplace Hall, was given to photo ops which were quite a relaxed matter due to the aforementioned improvements. Last year they also used several props like Gollum or the Three-eyed raven; this time, thankfully, props were abolished as they only made matters complicated and led to complaints (“why did they include Gollum but cut off half of my arm?” – it really happened!) The Chapel housed some more dealers, as it was deemed unsuitable for Q&A panels.

Last but not least, what’s a convention without cosplayers? Even if one does not count “just” knights, farmers and other aficionados of the Medieval era, there was a great deal of fans in cosplay. There were Hobbits, Elven warriors, Dwarves (who had to endure the hot weather), Gandalf the Grey and even a white Warg. A great Rohan warrior in full armor was strolling around, too. From Holland, Captain Jack Sparrow came over to have a chat with David Wenham and Adam Brown (who both not only were united by their Middle-Earth roles but also starred in the recent installment of the Pirates of the Caribbean franchise).

Other than that, the cosplay landscape was definitely dominated by Game of Thrones. There were several Jon Snows, one of them even with a real living white direwolf. There were many Sansas, Daeneryses, one very cool Lady Olenna and even a Varys (who shaved his head especially). And of course, one just has to mention the (real life couple) Sam Tarly & Brienne of Tarth. Especially the Brienne costume was really befitting the girl wearing it. She actually won the costume contest: there was one, organized as an “audience award”. Every visitor got a voting card at the entrance and could give it to the cosplayer for whom he would like to vote. The cosplayer who collected most voting cards at the end, won.

Final words: the MFC seems to have found a unique niche among other German conventions (if one considers not only the RingCon and the HobbitCon (recently merged to become MagicCon) but also the numerous ComicCons which spread across Germany in recent years like mushrooms. The niche is to unite an old castle atmosphere and a Medieval market with the chance to see your favorite actors and be able to chat or take a photo with them. At least the official numbers show that this concept is on a right way: during the weekend, the second MFC was visited by ~6000 people! And though there is no room to improve the quantity (the castle has a limited capacity), there is always room for quality improvement. And the fact that the organizing team is actually willing to learn is definitely a good sign.

We’ll find out on 25th and 26th August 2018, when the Medieval Fantasy Convention-3 will take place.

PS: more images can be found in the Photo Gallery. 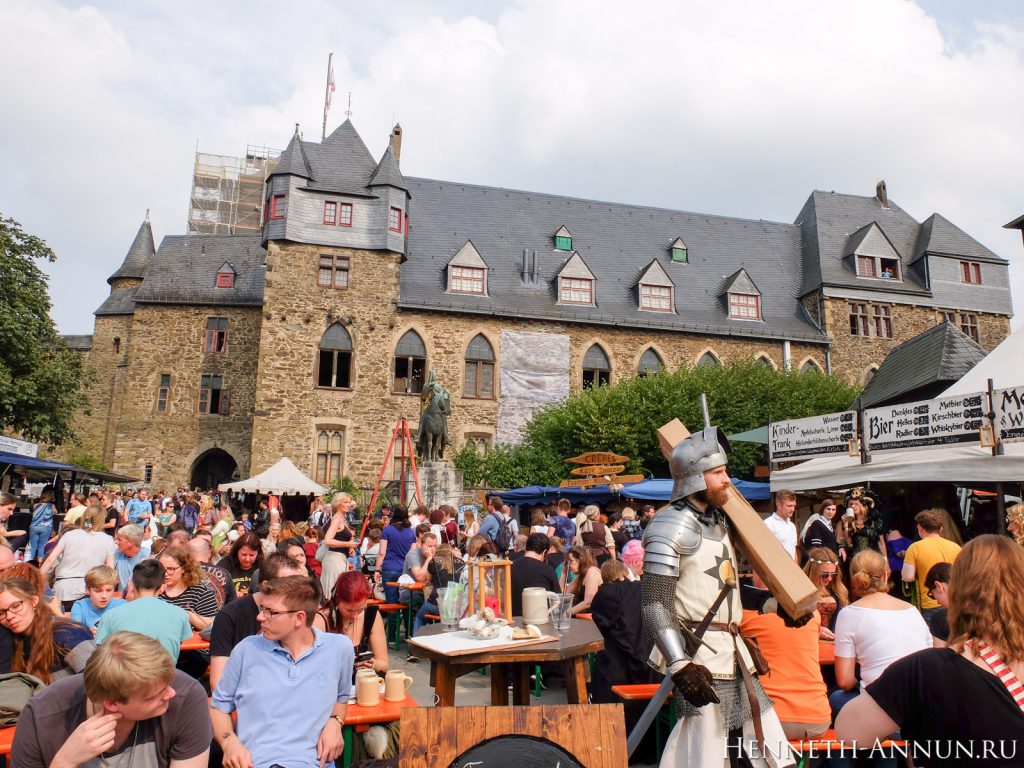