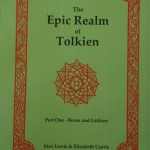 Malcolm from ADC Publications writes: Thank you for adding our earlier book to your website, so that your viewers are aware of its existence. This is our second and the newest publication this year: The Epic Realm of Tolkien Part One – Beren and Luthien (Authors: Alex Lewis & Elizabeth Currie)

Lewis and Currie continue their ground-breaking studies with an examination of Tolkien’s most personal story, the Tale of Beren and Lúthien in its various forms. It is analysed from the early version in the Book of Lost Tales, through the incomparable poetry of the Lay of Leithian, through to beyond the Silmarillion version and the ideas that Tolkien was working towards the end of his life. The astonishing and powerful connections between Beren and Lúthien’s tale and the Arthurian legends in their various forms are examined and give a fascinating glimpse into the world of medieval literature which Professor Tolkien knew and loved so well. Find out how Tevildo Demon-Prince of Cats came into the tale and then was dropped in favour of other concepts, how Tolkien pondered over whether Beren should be a mortal man or an immortal elf. And throughout these tales run the foundations of Arthurian Story in a fascinating way. The connections that Lewis and Currie pursue lead to an elegant and original explanation of the creative purpose behind the Book of Lost Tales as a concept, and also give compelling insight as to how this related to the concept inherent within the Silmarillion and Tolkien’s Legendarium itself. In Epic Realms of Tolkien, learn also of the true significance of the Eriol / Aelfwine character and his adventures and deeds. END_OF_DOCUMENT_TOKEN_TO_BE_REPLACED