Kaitlin from zooppa.com sends this in: I read your article on King Kong invading Dodger stadium and I thought the “King Kong’s Path to Universal Studios Hollywood” short film competition on Zooppa would tie in nicely.

A total of $15,000 in cash will be awarded to the best short films depicting Kong’s journey back to Hollywood. Universal Studios Hollywood plans to use the winning videos in the park, online, and for broadcast.

Here is a link to the competition page on Zooppa. END_OF_DOCUMENT_TOKEN_TO_BE_REPLACED

The director used the Venture II in his 2005 remake and later sold it to a property development firm in Wellington, which kept it moored at a wharf in the city. Ownership of the vessel has now passed to Wellington Regional Council after the company went bust, and local authorities plan to scuttle the ship in the Cook Strait on Tuesday (09Feb10), reports Radio New Zealand.

The plans have proved unpopular with residents after it was revealed the sinking will cost tax payers $23,800 (£14,875), but council officials insist the ship is becoming a safety hazard and can no longer be moored at the wharf. More..

After nearly 19 months away from the spotlight, a new King Kong — more grizzled and, definitely, ferocious — is preparing to return to Universal Studios Hollywood. Since the old animatronic Kong was destroyed in a fire on the theme park’s back lot, Hollywood’s top visual effects wizards have been tinkering away in a giant hangar in Playa Vista to create a new, more realistic ape to terrify visitors who take the park’s signature back lot studio tour.

Inside the humongous drab-green building, Academy Award-winning director Peter Jackson has led a team of film and theme park ride experts in creating a 3-D version of the hairy ape to replace the Kong that died in the June 2008 fire. More..

Peter Jackson has revealed that the release of his film The Lovely Bones was delayed so it would have a better chance of being considered for the Oscars. The film was to have been released in March but Hollywood studio Paramount postponed release until December. “When we showed them the cut late last year, they decided to delay the release until December to plop it into the “awards season”, which is a nice vote of confidence in the movie,” Jackson said in magazine On Film. The delay meant he had more time to work on the final cut and spend more time on visual effects. He wished he had had the same luxury with his last film, King Kong. “I wish we had this time on King Kong, which we badly wanted to reduce by 20 minutes, but we ran out of time before figuring out how to do it,” he said. Lovely Bones release in Oscar season 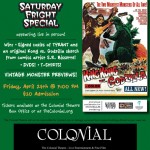 Mark Nelson, Editor/Screening Curator, Saturday Fright Special writes: I thought I’d pass along some info about the upcoming event that our NH-based horror host show (SATURDAY FRIGHT SPECIAL, seen on public access stations throughout the country) is putting on next month, shoud you or your readers be interested in attending, or in case you just want to help spread the word.

We’ll be screening a 35 mm print from Universal of the 1962 classic KING KONG VS. GODZILLA on Friday, April 24 at the historic Colonial Theatre in Keene, NH at 7PM. It will be a family-friendly fearsome festivity for all. What is especially exciting about this is that the print that we are screening is BRAND NEW (struck by Universal Pictures specifically for this event) and has never been touched or screened before. In addition to the main feature, we’ll be screening vintage monster movie previews, costumed characters from SATURDAY FRIGHT SPECIAL will be giving away DVDs and T-shirts, and overall creating a retro-fun night in the theater. END_OF_DOCUMENT_TOKEN_TO_BE_REPLACED 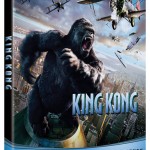 You can enjoy this gigantic remake in high definition this January. King Kong will be released on Blu-ray on January 20. We don’t have any cover art or pricing details at this time, but we’ll surely update this story as soon as we have more information. The disc will include both the theatrical and extended versions of the movie. The film stars Naomi Watts, Jack Black, Adrien Brody and Andy Serkis performing the motion-capture for the title character. END_OF_DOCUMENT_TOKEN_TO_BE_REPLACED

Damn y’all really getting to work investigating every square inch of this photo https://twitter.com/theoneringnet/status/1422961537824686087

I feel so incredibly inspiring to re-pick up the pen and start drawing some Lord of the rings motives again... and absolutely know what my next motive will be... 😊❤️❤️❤️ https://twitter.com/theoneringnet/status/1422961537824686087