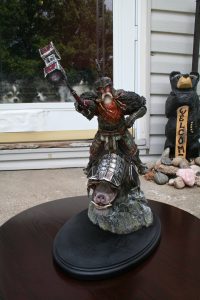 One of my favorite subsection of statues within the whole Middle-earth statue line from our friends at Weta Workshop is the rider line. This line obviously includes statues that involve someone riding a creature from Middle-earth. There are things like Legolas/Gimli on Arod to Gothmog on Warg. The Hobbit line of course has the amazing and large Azog on Warg, but not anyone from the good guy/gal side of things. That is until Dain IronFoot on War Boar showed up during Comic-Con 2015. Dain was a 800 piece statue and came in at a price tag of $499, which is now sold out from Weta. However you can still get this guy on the secondary market if you’re really hoping to add this to your collection.
END_OF_DOCUMENT_TOKEN_TO_BE_REPLACED One of the awesome Weta pieces from Comic-Con 2015 is now available to order. If you enjoyed the look Azog took in The Hobbit: The Battle of the Five Armies, or if you’re like me and just want more Azog, then this item is something you and I will both be adding to our collections. Azog: Commander of Legions is now up for Pre-order. The statue captures Azog with all his really cool armor and that new sword he implanted in his arm after The Hobbit: The Desolation of Smaug. The new Azog statue has an edition size of just 1000 pieces world-wide, and given the success of the first Azog statue I wouldn’t wait to order this one. The price tag is $349 and will be shipping in the first quarter of next year.

END_OF_DOCUMENT_TOKEN_TO_BE_REPLACED This week marks the second of the three week Weta post Comic-Con Extravaganza. Fans of Middle-earth now have the chance to add the Uruk-hai Swordsman who was part of Saruman’s army attack on Helm’s Deep to their collections. The Uruks were some of the coolest creatures we’ve seen in any movie, and this statue does such a fantastic job capturing all that amazing work by our friends at Weta. You can snag the Uruk-hai Swordsman for $299, he comes with an edition size of 1500 pieces world-wide.

Today is the first of three wonderful weeks of new items we can order from the goodies Weta Workshop had on display at Comic-Con 2015.

Minas Tirith one of the most important places in all of Middle-earth has been expertly captured by principal sculptor Leonard Ellis. All told it took eight people a total of 1,000 hours to bring this collectible to life. Due to land in our collections starting in the fourth quarter of this year Minas Tirith can be yours for $599.