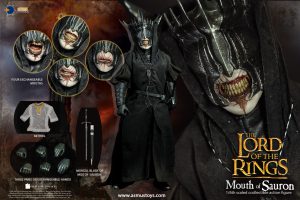 One of the new figures Asmus Toys had at Comic-Con this year was the solo version of the Mouth of Sauron. This piece allows fans who just want the Mouth of Sauron minus his horse a chance to get him into their collections. As you can see, this one turned out pretty solid with some incredible details on the different versions of his mouth piece. While this one is labeled as a ‘slim’ version, with all the stuff you get and how nice it looks there is nothing slim about him! You can get him right now for $145 and he is due to ship first part of next year.