Kevin sends this along: The voice of Bernard Hill is currently featuring in a documentary series in UK called ‘Wild China’. The BBC describes ‘Wild China’ as “China is a vast country with an astonishingly diverse landscape. Through unprecedented access, this six-part series reveals the little-known natural treasures and secret wildlife havens of China’s wildest regions.” BBC

Sideshow Collectibles has started taking pre-orders for the ‘Dark Counsel‘ diorama – featuring Brad Dourif as Grima Wormtongue and Bernard Hill as Theoden. They have also posted a 360° turnaround of the piece (see image). In other LOTR updates, Sideshow has posted their production photography for the Sam and Frodo 12-inch figures – if you haven’t picked up you figures yet, now is the time. The Samwise Gamgee and the Frodo Baggins Exclusive Editions (only available via Sideshow’s website and have an extra accessory) are on second chance and should sell out shortly. Also on second chance is the popular ‘Treachery of Saruman‘ diorama which is getting some great reviews. And last, if you are on the fence about any of these collectibles, check out the ‘Backstage Pass‘ features. They are neat little videos that explain the figure and showcase what makes Sideshow items worth owning. [Dark Counsel Diorama] [Frodo 12-inch Exclusive] [Samwise 12-inch Exclusive] [Hobbit Backstage Pass Video] [Treachery of Saruman Diorama] [Treachery of Saruman Backstage Pass Video]

Anna writes in: “Save Angel Hope” – a new comedy starring Billy Boyd and Bernard Hill will premiere in the US at the Brooklyn International Film Festival on Saturday, May 31. The premier will be at 3:00 p.m. with a second showing on Sunday, June 8, at 7:00 p.m. Both showings will be at the Brooklyn Heights Cinema. Read More 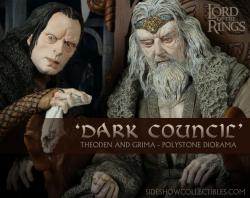 Collectors can look forward to a pretty realistic looking diorama coming soon from Sideshow Collectibles titled “‘Dark Council’ – Theoden and Grima Wormtongue.” From the looks of the piece, the sculptors have perfectly captured the likeness of Brad Dourif as Grima and Bernard Hill as the possessed Theoden. If Sideshow follows their regular schedule, we can expect this item to pre-order next week around 6pm PT. And if you are a Cate Blanchett fan, check out the Sideshow/Weta Polystone Statue of Galadriel, now listed at 35% OFF. [Dark Council Diorama] [The Lady Galadriel Statue]

Bernard Hill (born December 17, 1944, Manchester, England, UK) is a British actor of film, stage and television. He attended Xaverian College although at the time it was known as “Xaverian School”. Hill is reportedly an experienced horseback rider and a purple belt in karate. He also attended Manchester Polytechnic School of Drama at the same time as Richard Griffiths. Hill came to prominence in the role of the unemployed Yosser Hughes, a working-class man ultimately driven to the edge by an uncaring system, in Alan Bleasdale’s BBC Play for Today The Black Stuff (1979) and its more famous series sequel (also by Bleasdale), Boys from the Blackstuff (1982). His character’s much-repeated phrase “giz a job” became popular with protesters against Margaret Thatcher’s government, because of the high unemployment of the time. Previously, he had taken smaller parts in a number of British television dramas, notably appearing as the no-nonsense Roman soldier Gratus in I, Claudius (1976). He also played the Richard Plantagenet, Duke of York in the BBC’s 1982 productions of Shakespeare’s Henry VI plays. Also on TV, he played the part of Tom Higdon in The Burston Rebellion (1985).

Lion2b writes: It was recently announced that Mr Hill has been nominated for Best Actor for his portrayal of former Home Secretary David Blunkett in ‘A Very Social Secretary’. [More]