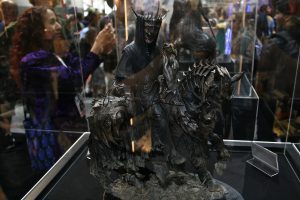 Comic-Con 2017 may be over but our coverage still has a little left for you all. Our friends at Weta Workshop had some really awesome pieces this year and were full of surprises. They hit us with pieces like Thranduil on Elk as well as the Gollum 1:3 mixed media statue. Both these pieces are fantastic and pieces nobody saw coming, which made covering the booth even more exciting. We had two pieces that fans had long been waiting to see, where fans could order them and get them added to their collections. Of course one of those was Grond who we had been patiently waiting to be able to order, and then we also got the Mouth of Sauron on Steed. Both pieces are limited with Grond at 500 pieces and the Mouth of Sauron at 750 pieces. Fans can expect these won’t last long so make sure to get your pre-orders in now.

Weta had been teasing these next pieces leading into Comic-Con and during SDCC we got to see what the teases were all about. The Epic mini-vinyl series launched during Comic-Con, taking an anime type approach to Middle-earth. Fans got to see the launch figures, which were: Frodo, Gollum, Gimli, Moria Orc, and the Uruk-hai Berserker. This was another successful Comic-Con for our friends at Weta Workshop showing they have an ear out for what fans want, and this was success for us as fans because once again we got several must have items.