From all accounts, Hobbitcon has started with a massive bang. In particular, images we’ve seen of the WETA booth over in San Diego are just amazing.

Carven statues of dwarves, massive, replica props in stunning detail, eight-foot-tall trolls, life-size lego renditions of Bilbo Baggins and Gandalf the Wizard plus 3D posters of the main cast — and that’s just the tip of the iceberg!

TORn’s booths are proving really popular with fans, too. If you’re going, and have been thinking of grabbing a t-shirt of a badge, let me just say that you better act fast — they are going like hot-cakes!

I can’t cope with giant crowds, and I’m starting to wish I was there! So, read on for a slightly madcap round-up of the Hobbitcon frenzy including just about every link or photo that I can find!

William, Bert and Tom at the WETA booth 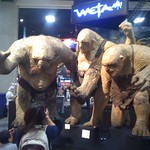 We saw some sneak peek shots last night, but now William, Bert and Tom — the famous trolls from the Roast Mutton chapter of the Hobbit — have been fully unveiled.

The level of detail is superb, but what impresses me the most is the expressiveness and feeling in the faces. Unlike the Moria cave troll, these trolls have intelligence. Maybe a dim sort of intelligence, but there’s a thought process going on there! What’s more, they talk apparently! 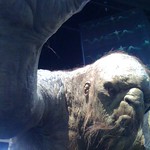 Note how the pose is different from pose that the trolls are frozen in when we see them in the Fellowship of the Ring Extended Edition. This new version is obviously some time before they’re turned to stone by Gandalf’s cleverness and the rising sun.

Our friend Quint over at AICN also has a nice set of images of the trolls from different angles. Head here check them out! 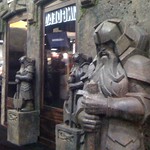 These fellows look seriously intimidating, guarding the WETA booth with their huge double-bladed axes. Maybe we’ll next see them guarding the empty, ruined halls of the Lonely Mountain? Plus there’s a few old friends from Lord of the Rings like this one on the left as well.

If you’ve got loads of money, these limited edition replica WETA props could be yours! 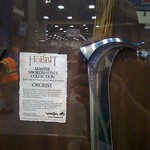 The descriptive text for Orcrist: “Each sword comes in its own case case with a Certificate of Authenticity, signed by Peter Lyon and Richard Taylor, and a 10-minute DVD showing how these swords were crafted by Weta Workshop.” They’re available from Q4, 2012, apparently! 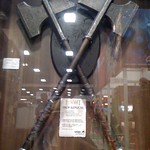 I know people are going to go crazy over the silver gleam of Orcrist and Sting, but I think the axes of Dwalin, in particular, are a revelation.

And the runes on them? They read, I think, something like: “Umraz” and “Uklakw” 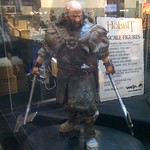 At the WETA booth, there’s also series of WETA Collectibles 1:6 scale minatures from The Hobbit on display.

It’s hard to decide which is better: Bilbo in a half-crouch with Sting, Gandalf with his staff, Dwalin and his axes, Balin about to draw sword, Bombur dashing about with his soup label in hand, or the fearsome-looking Thorin Oakenshield with Orcrist. 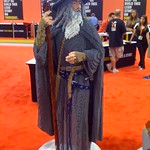 I remember, as a child, going to see world LEGO exhibitions and being completely awed by the skill and patience that went into their monumental creations.

Looking at these life-sized versions of Bilbo and Gandalf, made from thousands of blocks, I can’t help but be amazed all over again at the sheer attention to detail and persistence that goes into making these things. What a job that would be to have! 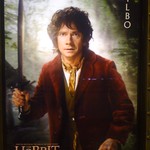 Lenticular printing produces images with an illusion of depth. If these images are a hint of what the 3D version of The Hobbit could be like, then it might be worth reconsidering your devotion to 2D — because they’re astonishingly lifelike and eye-catching.

Sixteen in total are on display in lightboxes at SDCC: all 12 dwarves, Bilbo, Gandalf, Galadriel and a particularly evil-looking Gollum who you wouldn’t want to meet alone in a deep, dark cave. Some details to look for Ori with his book and quill, the curl of Gandalf’s staff, Bofur with a flute… but really go check them all out over at Cinemablend — they have a comprehensive gallery of the whole lot.

Oh, and the TORn talk is on right now! So go check it out on our live feed or we’ll send Gollum after you! 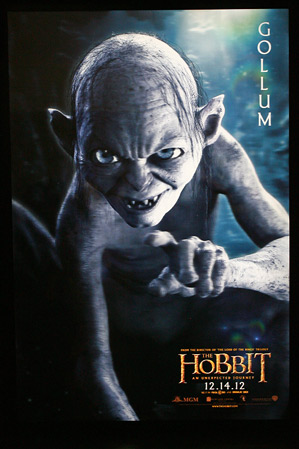