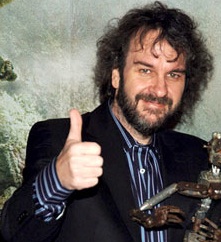 Said Peter Jackson, “I’m very pleased that we’ve been able to put our differences behind us, so that we may begin a new chapter with our old friends at New Line. ‘The Lord of the Rings’ is a legacy we proudly share with Bob and Michael, and together, we share that legacy with millions of loyal fans all over the world. We are delighted to continue our journey through Middle Earth. I also want to thank Harry Sloan and our new friends at MGM for helping us find the common ground necessary to continue that journey.”

“Peter Jackson has proven himself as the filmmaker who can bring the extraordinary imagination of Tolkien to life and we full heartedly agree with the fans worldwide who know he should be making ‘The Hobbit,’” said Sloan, MGM’s Chairman and CEO. “Now that we are all in agreement on ‘The Hobbit,’ we can focus on assembling the production team that will capture this phenomenal tale on film.”

Bob Shaye, New Line Co-Chairman and Co-CEO comments, “We are very pleased we have been able to resolve our differences, and that Peter and Fran will be actively and creatively involved with ‘The Hobbit’ movies. We know they will bring the same passion, care and talent to these films that they so ably accomplished with ‘The Lord of the Rings’ Trilogy.”

“Peter is a visionary filmmaker, and he broke new ground with ‘The Lord of the Rings,’” notes Michael Lynne, New Line Co-Chairman and Co-CEO. “We’re delighted he’s back for ‘The Hobbit’ films and that the Tolkien saga will continue with his imprint. We greatly appreciate the efforts of Harry Sloan, who has been instrumental in helping us reach our new accord.”

The two “Hobbit” films – “The Hobbit” and its sequel – are scheduled to be shot simultaneously, with pre-production beginning as soon as possible. Principal photography is tentatively set for a 2009 start, with the intention of “The Hobbit” release slated for 2010 and its sequel the following year, in 2011.

The Oscar-winning, critically-acclaimed LOTR Trilogy grossed nearly $3 billion worldwide at the box-office. In 2003, “Return of the King” swept the Academy Awards, winning all of the eleven categories in which it was nominated, including Best Picture – the first ever Best Picture win for a fantasy film. The Trilogy’s production was also unprecedented at the time.

For more information about “The Hobbit” films, please visit www.TheHobbitBlog.com.

Celebrating its 40th anniversary year, New Line Cinema is the most successful independent film company in the world. Its mission is to produce innovative, popular and profitable entertainment in the best creative environment. In addition to the production, marketing and distribution of theatrical motion pictures, the fully-integrated studio has divisions devoted to home entertainment, television, music, theater, merchandising and an international unit. In 2005, New Line partnered with HBO to form Picturehouse, a new theatrical distribution company to release independent films. A pioneer in franchise filmmaking, New Line’s Oscar-winning The Lord of the Rings trilogy is one of the most successful film franchises in history. New Line is a division of Time Warner, Inc. (TWX).

Peter Jackson is one of the world’s most successful filmmakers. His monumental achievement co-writing, co-producing and directing The Lord of the Rings trilogy (with fellow Academy Award winners and frequent collaborators Fran Walsh and Philippa Boyens) earned a total of 30 Academy Award nominations and 17 Academy Awards. Jackson and Walsh received their first Oscar nomination for Best Original Screenplay for their acclaimed film Heavenly Creatures. Jackson, through his New Zealand-based Wingnut Films banner, also was responsible for the globally successful 2005 remake of King Kong which earned over $500 million worldwide and 3 Academy Awards. Currently, Jackson is directing an adaptation of The Lovely Bones, from the acclaimed best-selling novel by Alice Sebold. He is also developing a trilogy of films with Steven Spielberg based on Tintin, the world renowned comic book series by Herge.

The Tolkien community is in hysterics today as we finally get the ‘official’ announcement concerning ‘The Hobbit.’ (Full Release) Now what? What can we expect? Well, first off, join the Tolkien community discussion in our forums and in Barlimans (IRC Chat). Then, strap on those seatbelts as we gear up for a wild ride! Director speculation, casting speculation, and don’t forget the infamous SPY REPORTS! Woo! We can’t wait! [Forums] [Java IRC Chat] [Digg It!]And don’t forget to check out the TORn presentation on ‘Making the Hobbit Happen’ from DragonCon 2007. In the presentation TORn staffers reveal how we believe the films will play out – including casting, locations and more! [Hobbit Presentation]