It is with a heavy heart that I write this news. Christopher Tolkien has passed away. He was 95 years old.

Christopher was the third son of our beloved author Professor J.R.R. Tolkien, and had spent much of his life honoring his father’s legacy and bringing us so many of the Professor’s works posthumously. He edited and published such monumental works as The Silmarillion, The Unfinished Tales, The Book of Lost Tales, The History of Middle-earth and, in recent years, the individually released tales of The Children of Hurin, Beren and Luthien, and The Fall of Gondolin. “The Lay of Aotrou and Itroun,” written by J.R.R. Tolkien in 1930, and first published in 1945 in the literary journal The Welsh Review, is set to be re-released in November of this year after more than 70 years of being out of print. The 508 line poem tells of the childless couple Aotrou and Itroun (Breton: lord and lady), who are helped by a Korrigan, a Breton term for a fairy.  When Autrou refuses to pay the price of marrying the Korrigan, he dies three days later and his wife, Itroun, subsequently dies of grief, leaving the twins she bore them to grow up as orphans.

From nothing more than this short description, fans will immediately be reminded of Tolkien’s gift for writing about, and romanticizing, tragic circumstances. Anyone who has read The Lord of the Rings knows of the sacrifices Frodo made, [big LOTR spoiler here]…

END_OF_DOCUMENT_TOKEN_TO_BE_REPLACED Starting a couple of months ago, Steven Umbrello began work on an immense project. What you see before you, in the pictures on this page, is an illuminated manuscript of the first part of Professor Tolkien’s The Lay of the Children of Hurin from The Lays of Beleriand.

Having been in love with the tales of Middle-earth since he was a child, as well as being a collector of books, Steven was determined to complete this work. Over the past couple of months, he has been toiling away: writing by hand, illustrating, painting, binding – all while keeping readers of his blog The Leather Library updated on his progress.

What has resulted from his efforts is an incredible achievement. Steven is quick to point out that this is the first time he’s done something artistic of this nature, but you’d be hard pressed to believe him. Needless to say, his work here impressed us mightily – and it’s a testament to his passion and dedication. END_OF_DOCUMENT_TOKEN_TO_BE_REPLACED 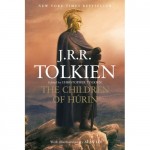 The folks from Houghton Mifflin sent us along review copies of ‘The Children of Hurin’ paperback and the reprinted edition of ‘Tales from a Perilous Realm’, now featuring artwork by Alan Lee! END_OF_DOCUMENT_TOKEN_TO_BE_REPLACED

The folks from Houghton Mifflin write: I saw your recent posting about Alan Lee attending FaerieCon in Philadelphia, and I wanted to spread the word that Alan will be visiting a few other U.S. cities to promote THE CHILDREN OF HURIN paperback (national release date: October 14) and the brand-new TALES FROM THE PERILOUS REALM, immediately following his FaerieCon appearance!

As TORn readers know, THE CHILDREN OF HURIN is the first complete book by J.R.R. Tolkien since the 1977 publication of The Silmarillion. It was a #1 New York Times bestseller in hardcover, and the Associated Press called it “the book for which [Tolkien] readers have been longing.” The paperback edition of THE CHILDREN OF HURIN includes eight color paintings by Alan Lee and a two-color fold-out map. END_OF_DOCUMENT_TOKEN_TO_BE_REPLACED

Smeagirl and many other fans sent along this email from HarperCollins: As a registered member of the official HarperCollins site for J.R.R. Tolkien, we wanted to give you the best opportunity possible to take advantage of a forthcoming, special signed and limited edition of his final masterpiece – The Children Of Húrin. The book is an essential for all Tolkien fans and represents a unique opportunity, with only 500 being printed. Click here to register your interest or read on for more information. As you are doubtless aware, The Children Of Húrin was completed by his son Christopher last year and the special signed and limited edition is being released in conjunction with the Tolkien estate and publisher HarperCollins. END_OF_DOCUMENT_TOKEN_TO_BE_REPLACED