From geek.com: EA has posted an online status update on its website informing gamers that another twelve titles are losing online functionality. On March 16, 2010 online service will shutdown for players of ‘Lord of the Rings: Conquest for PC, PlayStation 3 and Xbox 360’.

EA has been keen to stress it doesn’t take these shutdowns lightly, and only carries them out on games that just aren’t popular anymore:

“The games scheduled for shutdown in March and April 2010 represent less than 0.3% of all peak online players across all EA titles. Despite some people’s perception, there is a lot of behind-the-scenes work involved with keeping these older games up and running. We would rather our hard-working engineering and IT staff focus on keeping a positive experience for the other 99.7% of customers playing our more popular games. These decisions to retire games is never easy.”

From CrispyGamer.com: With Pandemic behind the reins, will The Lord of the Rings: Conquest just be Star Wars: Battlefront with different uniforms?

Having already told the entire tale in videogame form, EA is now looking at new ways of retelling the epic saga that was Peter Jackson’s masterful movie version of J.R.R. Tolkien’s “The Lord of the Rings.” Thankfully, the software giant has opted not to make an arcade-style kart-racing game, but has instead charged Pandemic Studios — makers of the Battlefield-esque Star Wars: Battlefront series — with the task of making The Lord of the Rings: Conquest, a similarly massive multiplayer game out of the fantasy film. Though according to Sean Soucy, the game’s lead designer, Conquest won’t just be Battlefront with Elves instead of Ewoks. The Lord of the Rings: The Return of the Game 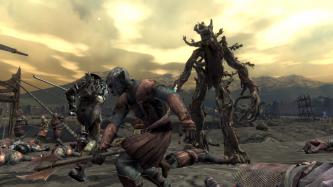 Pandemic Studios, the geeks behind Star Wars: Battlefront I & II, Mercenaries, Destroy All Humans, and other titles contacted us a while back giddy with excitement over their new project ‘Lord of the Rings: Conquest’. This is setting up to be the battle game to end all battle games, I sat with game director Eric “Giz” Gewirtz to talk about it. Take a look! END_OF_DOCUMENT_TOKEN_TO_BE_REPLACED