News is all over the place today about changes at the top of MGM, one of the studios co-financing and co-producing “The Hobbit.” There are lots of stories that tackle the business side of things. The New York Times takes a crack as does the L.A. Times while The Wrap looks at a possible takeover while Variety looks at Hollywood’s reaction and The Geek FreePress examines what it might mean for “The Hobbit,” calling this change the possible dragon for the film.
Kristin Thompson also weighed in with two seperate blog posts found here and here.
If anybody in our spy network has any further info of what this might mean, please send us word at SpyMaster@TheOneRing.net. 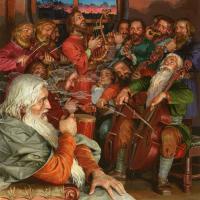 Kristin Thompson writes: On Saturday at Cannes, MGM CEO Harry Sloan dropped a couple of interesting remarks about Peter Jackson, Fran Walsh, and the Hobbit films. They’re on The Frodo Franchise, along with some links to background on MGM’s role in the production. Harry Sloan Talks ‘Hobbit’