As we draw nearer to the end of our closer look at all twenty of the recently announced (or confirmed) castings from Amazon, staffer greendragon brings us up to speed with the incredibly impressive career of Scottish actor and film maker Peter Mullan.

Note: This comes from our newest contributor Momosanla. Look for more great stuff from her soon.

If you’re looking for a good book to read on your summer holidays – fire up those digital readers because you’re in luck. The finalists for the 2012 Mythopoeic Awards were announced on Tuesday, May 22. Past award winners have included the Harry Potter series, Orson Scott Card for “Seventh Son” and Neil Gaiman for “Anansi Boys”. With a track record like that, you’re sure to find a quality read amongst the nominees.

The Mythopeoic Society, founded by Glen GoodKnight in October of 1967, is a group dedicated to the discussion of and the study of the literary genre of mythopoeia: authors who create an entirely “new and transformative” mythology or “incorporate and transform existing mythological material.” Specifically the society focuses on the works of Inklings members J.R.R Tolkien, C.S. Lewis and Charles Williams. Each year, since 1971, they have honored outstanding examples in both adult and children’s fiction and non-fiction studies. END_OF_DOCUMENT_TOKEN_TO_BE_REPLACED 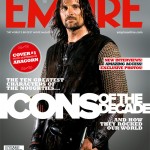 From EMPIRE: Some are mad, bad and dangerous to know. Some you could safely bring to visit your granny for afternoon tea. But all of these ten characters are icons, the colossi who bestrode the last decade and gave us some of its most memorable moments. We asked you to vote; you answered in your thousands – and here are the top ten results, who will appear on ten special covers of the next issue of Empire magazine, presented in alphabetical order. Why not numerical? Well, when you’ve got characters this ace, why on Earth would you want to quibble about who’s best? We’ll be revealing the covers over the next few days, so keep an eye on this page to choose your favourite and decide who to buy.

#1 Aragorn
Inside the issue: A few of the reasons Viggo made the perfect Aragorn – by Ian Nathan

Akron Symphony Opens Pops Season With Music of Vampires, Wizards, and Jedi Knights, October 25. Concert to include music from Star Wars, Star Trek, Harry Potter, The Lord of the Rings, Twilight, and more. Akron—The Akron Symphony begins its 2009-2010 Pops season with the music of Vampires, Wizards, and Jedi Knights on Sunday, October 25 at 3:00 PM at the University of Akron’s E.J. Thomas Hall. Conducted by Akron Symphony Associate Conductor Christopher James Lees, Film Music Fantasies will present selections from the musical scores of such blockbuster film franchises as Star Wars, Harry Potter, Star Trek, The Lord of the Rings, Superman, Spider-man, The Wizard of Oz—and the latest sensation Twilight. END_OF_DOCUMENT_TOKEN_TO_BE_REPLACED

Soon after actor Richard Harris died, there was a lot of talk that Ian McKellen — another premier British actor — could take over the role of Albus Dumbledore in the Harry Potter films. For McKellen, however, it was never an option. “People say to me, ‘Don’t you wish you’d played Dumbledore? I say, ‘No!’ I played Gandalf. The original.” McKellen shared those comments with Ireland Online about this character from the Lord of the Rings trilogy. But McKellen’s refusal to take on the role seemed to have more to do than simply what character from which franchise was superior. No Regrets For McKellen In Turning Down Harry Potter