Brad Dourif’s run as the ‘Doc Cochran’ on HBO’s Deadwood has come to a disappointing end – as the ‘Wormtongue’ actor did not even apear in Sunday’s series finale. If you are like me, Deadwood was one of the highlights of TV for the past three years, but HBO has decided to cancel the series for suspect reasons. Lets hope Dourif’s character gets an appropriate storyline end when HBO shows two feature movies slated for next year. [Contact HBO]

Ringer Spy Anonymous sends along these great 3 pictures from The Two Towers! Some fearsome Uruk-hai possibly at the battle in Helms Deep, the lovely Miranda Otto as Eowyn and your first ever good look at Brad Dourif as Grima Wormtongue! 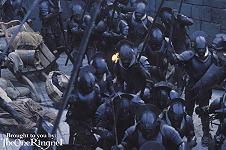 Ringer staff member Thorongil had the chance to met up with Brad Dourif (Grima Wormtongue) at last month’s ICON 20 convention in Stoneybrook, NY. Thorongil had the chance to find out what Brad thinks about Grima, the LOTR sets, Peter Jackson, his fellow cast members and much more! Check out this exclusive interview AND the accompaning real audio files for more! [More]

You can catch Brad Dourif (Wormtongue) in ‘Color Of Night’ on Cinemax. [More]