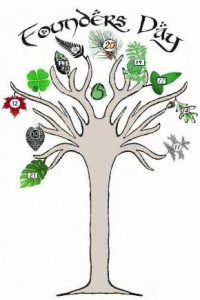 On April 26, 2009, TheOneRing.net marked its 10th anniversary with a huge celebration. It was quickly agreed that the TORn-born Founders Day holiday would be an annual event.  The Discussion Board members wanted a proper logo to mark each year; so being fans of J.R.R. Tolkien, we decided a Party Tree would be perfect!  Discussion Board member Ainu Laire gave us this lovely elvish design to build upon. Every year, a unique leaf has been added to mark each TORniversary.  So, beginning with our 11th Founders Day/Anniversary/TORniversary (also like Tolkien… there are several names applied ;), we planted our Founders Day Party tree with a leaf for our 10th and 11th TORniversaries (2009 & 2010).  We have just added our 21st Anniversary Leaf (2020).  Please see below for the description of each year’s leaf. 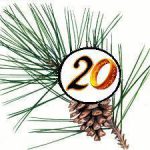 20th TORniversary Leaf (2019)  Black Pine (Pinus Nigra) – It is told that J.R.R. Tolkien’s  favourite tree was found in the Oxford Botanical Garden where it was believed to be planted circa 1799; 220 years ago this year. Tolkien he enjoyed being photographed resting under the tree by his grandson, Michael, on August 9, 1973… less than a month before Tolkien passed away on September 2nd.  For more on the story of this magnificent tree, please click here [coming soon].  During this past year, there’s been a lot of excitement with the development of Amazon’s Lord of the Rings Original Series.  The anticipation grows with every clue being leaked to TORn, like this beautiful Map of Middle-earth!  Stay tuned as more tidbits are revealed and the project slowly develops… at least it feels slow!

st TORniversary Leaf (2020) Tropical – “Tolkien“, the biopic of J.R.R. Tolkien’s youthful years, was finally released in theaters.  This past year also marked the sad loss of Christopher Tolkien, son of J.R.R. Tolkien, at the age of 95.