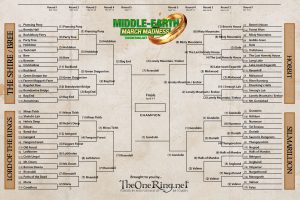 And then there were two… After two weeks of battles between some of the key locations of Middle-earth, we’re down to the two places which will fight it out to see who will be Grand Champion 2019.

Two tough duels made up the semi-final. On one side, Bag End took on Rivendell; and as hard as that hole in the ground tried, it just could not overcome the power of Lord Elrond. In the end, Rivendell took almost two thirds of the vote in this contest.

On the other side, Gondolin faced off against the Lonely Mountain; and this was an epic fight indeed! The difference came down to less than 3%! But once again, the magic of the elves won through, and Gondolin just defeated Erebor. The dwarves will not be pleased!

So now the hidden city takes on the hidden valley! Two elvish realms face off in the final: Rivendell vs Gondolin. Which location will be the ultimate victor? YOU DECIDE! Voting in the Final is open now, and only goes for TWO days, until 10pm EST on Friday 5 April. So don’t delay! Rally the troops and VOTE NOW on this post! The Grand Champion will be crowned on Saturday!