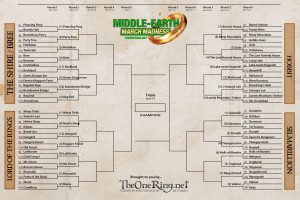 Middle-earth Map March Madness 2019 Round 2 is up! 64 locations went into battle in Round 1; now only 32 remain. Let’s take a look at some of the Round 1 results:

No surprises in The Shire location bracket. Bag End, Hobbiton and the Prancing Pony all won their bouts with 80% or more of the vote. Bree and Buckland were in the 70s for their victories (over Bywater and Crickhollow respectively). This staffer is especially pleased to report that the Green Dragon Inn is safely through; I am of course pulling for it to go all the way to ultimate victory!

Bucklebury Ferry is out, conquered by the Party Tree, with the voting split two thirds to one third; and Samwise will be sad to know that Bagshot Row is also gone, as it was unable to stand up to the Brandywine Bridge.

The Lord of the Rings bracket results were also largely as one might expect. Moria, Rivendell, Lothlorien, Fangorn Forest and Minas Tirith all sailed through with no problems. Isengard and Mount Doom had to fight a little harder, but in the end they conquered their opponents, Barad-dur and the Barrow Downs. (Alas, still no barrow wights making an appearance. Maybe we’ll get to see them in the Amazon series…?)

Perhaps the toughest fight in Round 1 of this bracket was Helm’s Deep vs Edoras. How to choose between those two?? In the end, it was Rohan’s stronghold which won the day, knocking out the Golden Hall, but with a margin of only 10%.

On to Hobbit locations, where the Lonely Mountain, Lake-town, Mirkwood, Dale, Beorn’s House, the Last Homely House and the Misty Mountains were all triumphant without really being put to the test. The only close battle in this category was between Smaug’s Lair and the Elvenking’s Halls. Thranduil is going home after just one round; the fire drake conquered in the end, though the margin was in single digits. And now Smaug’s Lair has to take on Erebor in Round 2; a conflict of interest, surely?!

Finally, the Silmarillion bracket saw some closer engagements than in the other groups. Nargothrond eventually overcame Menegroth, and Angband beat Vinyamar, but both contests were tight. Doriath, Thangorodrim, and the Halls of Mandos all won their duels with about two thirds of the vote. Wider margins were seen in the battle between Numenor and Tol Eressea; the island which caused so much excitement with its appearance on the Amazon series’ map is through, with almost 80% of the poll. The biggest victories in the entire first round were those of Valinor over Falas and Gondolin over Hithlum, with the winners both taking over 90%.  (Remember, if you want to know more about any of the Silmarillion locations, you can read more here.)

So on to the second round! Will Hobbiton beat Bree? What will happen when Minas Tirith takes on Helm’s Deep? Can Gondolin defeat Numenor? And most importantly, is the Green Dragon on the way to the final prize? (Fingers crossed; no journalistic impartiality here!) YOU decide!