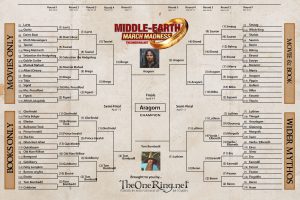 Almost three weeks ago we began our battles in this year’s Middle-earth March Madness. Each year, we try to mix things up a bit by creating different brackets; this year the categories were Books Only, Movies Only, Wider Mythos and Movie and Book, giving us four sets of varied characters from Tolkien’s realm. We also let previous champions Gandalf, Galadriel, Samwise Gamgee and Thranduil sit it out in a ‘Champion’s Hall of Fame’ – so we knew we’d have a first time victor this year.

Before we announce the overall winner, let’s look back over the five rounds which led up to the Final:

In Movies Only, the Moth Messengers made their first appearance, but were quickly squashed under the trotters of Dain’s Boar. Sebastian the Hedgehog, however, in a blow for small mammals everywhere, vanquished the Goblin Scribe; and there were brief hopes that he might make his way onwards to win the group. Alas, in Round 2 he came up against Tauriel, and he was no match for the elf warrior.

Alfrid Lickspittle, to the relief of many, was hastily dispatched by Figwit; the immaculate elf cruised through to the Sweet Sixteen Round 3, only to be defeated there by mighty stallion Brego. This fiercesome mount was the overall victor of the Movies Only group, having beaten Tauriel in the Elite Eight round.

Brego faced the winner of the Books Only section; a tough group, featuring such legends as Goldberry, Glorfindel, Elrohir, the Barrow-wights and Quickbeam. Small wonder that Fatties Bolger and Lumpkin were unable to get past Round One! In Round Three we had the first awkward pairing of the tournament, when Tom Bombadil had to take on his wife, Goldberry. Perhaps he overcame her, or perhaps she graciously allowed him to win; either way, it was the creature in yellow boots who went on to secure the division.

Not surprisingly, some of the most popular figures appeared in the Movie and Book bracket. Here the likes of Bilbo, Pippin, Faramir and Boromir had to battle Merry, Thorin, Aragorn and other heroes. Even the villains had tough match-ups, with Smaug facing the Witch-king and Sauron up against Shelob – and these were all just first round fights! By the Sweet Sixteen, Sauron was the only bad guy still in the mix – but Elrond did what he could not at the end of the Second Age, and vanquished the Necromancer; only to fall to the section winner, Aragorn, in the Elite Eight.

That fourth round also saw our second difficult ‘lovers’ tiff’, with Beren coming up against Luthien in the Wider Mythos division. Their journey to that point had seen them conquer such worthy opponents as Feanor, Earendil, Glaurung and Varda. Even Morgoth and Eru himself couldn’t make it past Round Two! In the Elite Eight match-up, mortal man Beren was no test for his elf spouse; she won their battle with an overwhelming more than 70% of the vote, making her winner of the Wider Mythos section.

In the Semi Finals, Luthien wasn’t able to defeat another devotee of elf-maidens; she was conquered by the Ranger from the North. The other Final Four battle brought disappointment for those of us hoping for a Brego vs Aragorn final; Tom Bombadil beat the steed, taking almost two thirds of the vote.

And so Aragorn was in to his second Middle-earth March Madness final, facing a somewhat unknown quantity in the strange and ancient creature from the Old Forest. The 2200+ votes have been counted, and the winner is…

ARAGORN! The Ranger from the North, Isildur’s heir, proves himself the Once and Future King, and with almost 70% of the vote, he becomes Middle-earth March Madness Champion 2017! 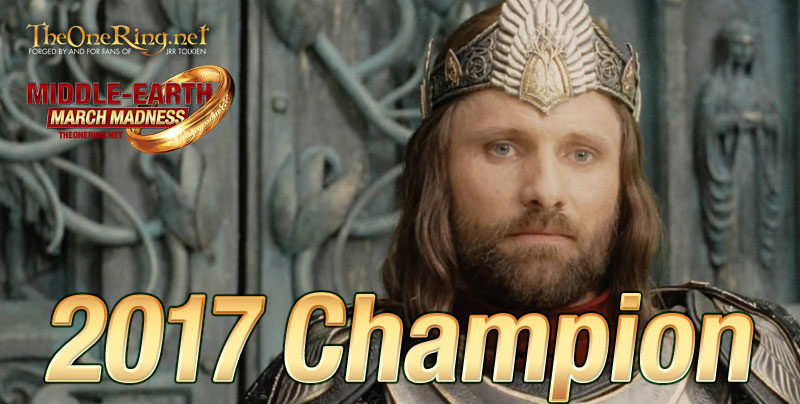 Over 50,000 votes were cast in this year’s event. The majority of the voting came from the United States (60%), but places like the UK and Canada made a valiant showing with 7% each.

Thanks to all who participated in the fun this year – we hope you enjoyed it. Let us know if you have suggestions for brackets or pairings in future.  Middle-earth March Madness will return in 2018!

Here are the full results for Middle-earth March Madness 2017: 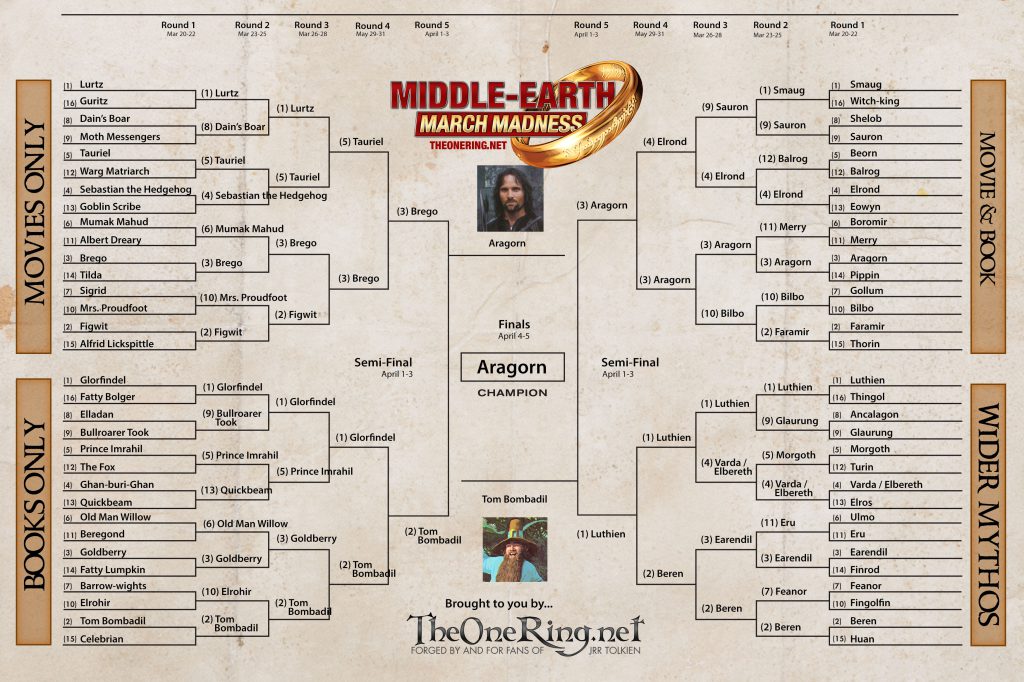