So the battle drums continue to beat, and sixteen weary victors continue on into Round 3 of Middle-earth March Madness 2017! Only YOU (and as many of your friends as you can round up to join in the voting) can decide who will make it on to the Quarter Finals. Let’s see who’s still with us:

First up, the Movies Only category, where characters created by PJ and his gang fight it out in search of eternal (until next year, at least) glory: Aragorn’s loyal Brego had no trouble seeing off Mumak Mahud – clearly the rider is no match for the horse. Figwit defeated Mrs Proudfoot without disturbing a hair on his immaculate head; and it will come as a big disappointment (but perhaps no surprise) to some that Sebastian’s dreams of conquest are over. Yes, despite a brave fight from the spiny mammal, pointy-eared warrior Tauriel came out ahead, and progresses to Round 3.

On to Books Only, where Goldberry and Tom Bombadil continue on without any real problems. They may not have made it into the movies, but they have made it to Round 3 – where, awkwardly, they now have to face each other. Glorfindel joins them, but sadly Quickbeam was too slow to get going in this round, and was defeated by Prince Imrahil.

In Movie and Books, Bilbo is holding the torch for all hobbits; with Merry defeated by Aragorn, Mr Baggins is the only halfling still in the contest, having narrowly beaten Faramir. (With Aragorn and Brego both continuing on, we find ourselves wondering – what if they were to meet in the final? Would Brego be half-mad enough to vanquish his kingly friend, or would he have seen enough of war by then, and concede to the man he saved?)

Finally, in the Wider Mythos set, Luthien and Beren progress together, having seen off Glaurung and Feanor. In The Silmarillion, we learn that of all the Valar, Morgoth feared Varda the most; and well he might, as after a close run battle between them, Varda emerged victorious. But it is in this category that we find the biggest upset of this round – Earendil is sailing on, after a shock victory over Eru! Who would have expected a Mariner to beat Middle-earth’s supreme being? They don’t call it March Madness for nothing, you know…

Here are the full results from the second round: 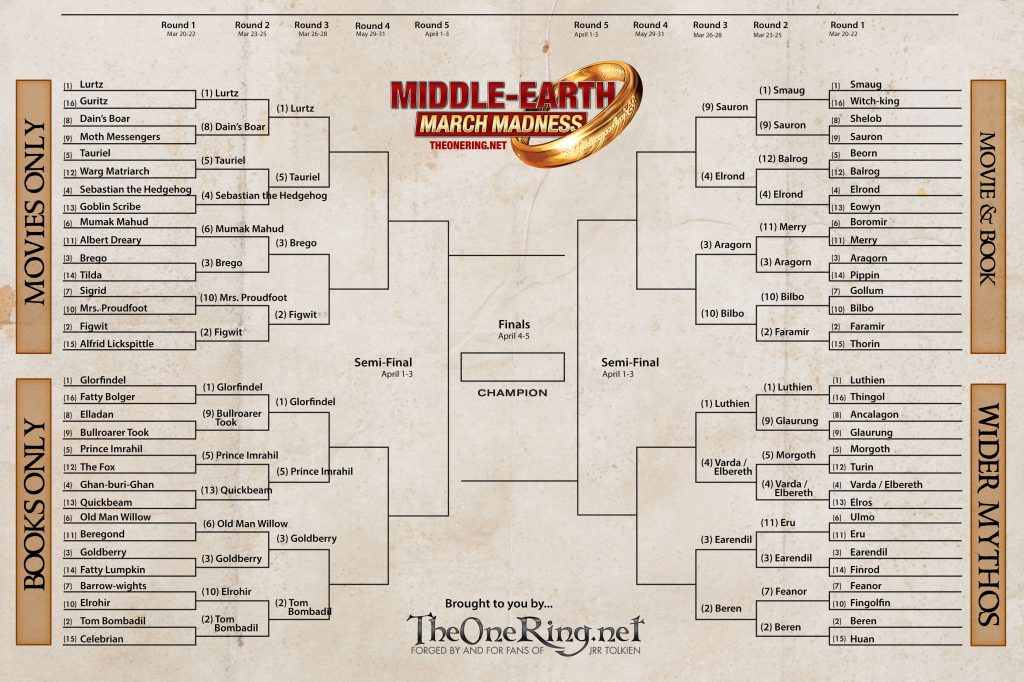 Round 3 voting is open until March 28th 10pm EST. Will Goldberry final show Tom exactly what she thinks of his yellow boots and his ‘Ring a dong dillos’? In a showdown worthy of the end of the Second Age, will Elrond conquer the dark lord Sauron? It’s up to you – vote now!