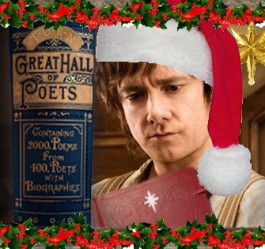 There and Back Again, by Frodo Baggins

Old Bilbo took a walking holiday with hearty dwarfs.
A wizard’s lucky number solving riddles in the dark,
He won a magic ring, did outwit a fearsome dragon,
And then emerge from raging battle Thorin’s truest friend!
What I would only give just to go there and back again!

And now the magic ring is mine, yes to my great regret.
To leave my cozy hobbit hole, the date at last is set.
The whole of Middle Earth at stake, not a lonely mountain!
At least my Uncle Bilbo knew where his great trip would end.
I have not left for where “there” is yet so long to be back again!

My journey’s end is one of doom and this alone I’ll bear.
Though my companions nine do swords and bows and axes swear,
The oath I took to brave the Mordor waste does not bind them
Lest Sauron’s ring their bane become before Orodruin.
I’ve sworn I will go there, but will I make it back again?

The ring has melted in the flames and Middle-Earth is free
Of Morgoth’s minion, Orc-lord Sauron, and his tyranny.
And yet I find my wounds of sword and sting and tooth won’t mend.
Though all the nine save one went home, my journey will not end.
Although I made it there, for me there is no back again.

The Chiefest and Greatest of Calamities

“Who dares entering my domain?
Who is so bold to take my gold?
I am the king of the mountain,
who slayed all warriors of old.

Well thief, where are you? Show yourself!
You’re caught in the dead of night.
I smell you, and I hear your breath!
Don’t be shy, step into the light!

Do you think you can deceive me?
I know you stole something of mine.
One of my precious golden cups,
nicely crafted and shining so fine.

You will take nothing from me, thief.
You and your friends will not succeed.
I’ve eaten your little ponies,
and will punish you for your misdeed.

Do not think you can take revenge,
the old king of this hall is dead.
I ate his people like a wolf,
and the rest fled from me with dread.

You see: my armor is like iron,
I can’t be pierced by a single blade.
Trust me, I feel completely safe
from your brave little Dwarvish raid.

For my teeth are swords, my claws spears,
and my wings a hurricane, so strong.
This quest for Erebor has failed,
your people have never been so wrong.

And I know who assisted you:
those lowly men of the long lake.
It’s time to pay them a visit,
they will all fear the fire drake.

They should not have listened to him,
this lord of the silver fountain.
Now they will pay homage to me,
the true king under the mountain!”

The betrayal of Gorlim the Unhappy

By Sarah Idriél The Fair

There was a man, in those old days when Beren still walked on Arda

and Lúthien Tinúviel was dancing free to the music of Daeron’s flute,

and this man’s name was Gorlim and he was married with Eilinel the White,

fair and gentle maiden and she was much loved by his husband.

But too soon came the day when Gorlim had to leave her,

because of ‘The Battle of Sudden Flame’, horrifying and terrible day in the memory

of men and elves, but the exact amount of pain no one could say

because very few returned and someone who remembered said once;

‘I could not talk about that day of agony, because great sorrow overshadow my heart’

but Gorlim went away with his lord, Barahir 7th head of the house of Bëor,

and in the glory they left, to the fourth battle of the Wars of Beleriand.

Bravely they fought but at last Morgoth the Accursed gained the victory,

and the remaining fled and hid, and Gorlim was among those who returned

only to found that the lands were plundered and Eilinel was nowhere to be found!

Great was indeed the grief in that day, but even greater was the grief of Gorlim

because of the disappearence of his much beloved wife.

Gorlim joined Barahir’s outlaw band and many times he secretly

went back to his house to seek Eilinel and look, one autumn when he came again,

the house and he shouted for joy;

Dear Eilinel, she has found the way!’

But cruel treachery was that fair light on the window

and Gorlim was captured by Sauron’s hunters.

that he could reunite with his beloved wife Eilinel,

and Gorlim, his heart sank into darkness, and what he decided in great despair

and sorrow and in the greater desire to see again fair Eilinel,

let Gorlim, brave man of the House of Bëor, to his death and tragedy,

for on the instant Gorlim spoke, Sauron laughed and the earth and mountain were shaking under his black speech;

‘Gorlim the traitor, you shall reunite with your wife, indeed!’

So Barahir’s men were killed except one, who was not there at that moment,

Beren, Barahir’s son had a dream where Gorlim’s spirit came to him

and said to Beren;

‘I, who was cruelly betrayed, I am traitor myself,

I’ve betrayed my Lord, by my word!’

And Gorlim The Hapless cried out;

‘So I plead for forgiveness!

‘Beren, it is no time to waste,

your father needs your aid!’

But it was too late.

And Beren, being in great agony,

swore an oath to avenge his father,

‘but I shall not wept, for my heart is stone-cold’

This was the tale of the betrayal of Gorlim the Unhappy, who was also betrayed.

And Eilinel, fair Eilinel, had died a long time ago.