The back cover of a 2014 Hobbit calendar from SD Toys reveals something interesting — what we believe is a new image of the shapeshifter Beorn, as played by Mikael Persbrandt. Excitingly, we believe it also finally answers a long-standing question about a series of spy images (and video) from Ringer Glow that we revealed way back in November 2011. This might be some heavy spoilers for some, so consider yourself pre-emptively warned!

But first, the image from SD Toys!

Well, apparently the image IS real because Warner Bros. has asked us to remove it. Sorry about that, folks. If you were lucky and got in fast, you have seen Beorn in human form. If you weren’t, you might still be able to find it if you dig around the internet a bit.

In the meantime, here’s our detailed description:

Beorn is standing in what appears to be a field, in front of a large wooden chopping block made from the stump of a tree. Hewn logs, presumably intended as firewood, lie in a pile beside him. Beorn himself seems tall and very muscular – very solidly built in the torso, with very broad shoulders and thick biceps. His right upper-arm/shoulder may feature a large dark, tattoo. Or it may be grime. It’s too hard to be certain at this resolution. In fact, his entire torso appears to have dark striations. Could his entire body be tattoed? Is it some natural effect of being a skinchanger?

We view him from behind and to the right, so it’s mostly an image of his back but we do get to see his face and hair in profile. His nose is long and patrician, but the dark mane of hair is the real talking point. Swept backwards, it’s like a cross between a spiky mohawk and a mullet. You could almost imagine David Bowie rocking this look in the late ’70s and early ’80s. He wears brown trousers that have the same look and fit as the concept art we’ve seen from the production blogs. It is belted at the waist, but Beorn is shirtless.

The background is of a green, flat valley with a lake or small body of water off to the left beyond some low bushes. The valley sides rise steadily in the distance in the manner that’s often see throughout the South Island of New Zealand and particularly in the Glenorchy/Paradise area. Beorn appears to keep goats.

What do people think? Well, so far some readers are more than a bit bemused. One says: “Looks like some beauty and the beast guy”. Another: “he looks like some sort of punk rock/redneck hybrid. I half expect him to drop the axe and pick up an electric banjo.”. What do you reckon? Did you catch a glimpse? Let us know your thoughts below!

That’s no orc or goblin

Let me tell you: that’s no orc or goblin. Even if you did see one in such a rustic pastoral scene, would goats hang round near such a creature? No, not likely. I also think we can agree that it’s very different look to the Beorn of the graphic novel (thank-you to Ringer Ross for that link!).

The hair: is it a mohawk or a mullet? Or some peculiar combination of both? There do seem to be similarities with the hue of Bear!Beorn’s pelt as seen below in the original “Scroll” image that was released about 12 months ago. And is that a tattoo or some marking on Persbrandt’s right upper-arm/shoulder, just above the bicep?

It also might be worth making some comparisons to what many long believed (and now looks to pretty much confirmed) original concept art/sculpt for Beorn that was in one of the early production vlogs. The trousers seem almost the same, and both model and actor have around the same bulk. I reckon it’s a match.

A concrete link with the old Paradise set?

The other interesting thing about this calendar picture derives from the background. When Ringer Glow provided those superb location spy shots, they also included several of the surrounding countryside.

But in particular, I’m thinking of the one directly below — which reveals a similar slope to the nearby mountains and the presence of water. Certainly we’ve seen snippets of both the interior and exterior of Beorn’s house in stills, the trailer and production blog scenes, but for mine this pretty much nails it — this is the Beorn set and there will be a gate in a thorn wall just like in the book.

After a while they came to a belt of tall and very ancient oaks, and beyond these to a high thorn-hedge through which you could neither see nor scramble.
“You had better wait here,” said the wizard to the dwarves; “and when I call or whistle begin to come after me — you will see the way I go-but only in pairs, mind, about five minutes between each pair of you. Bombur is fattest and will do for two, he had better come alone and last. Come on Mr. Baggins! There is a gate somewhere round this way.” And with that he went off along the hedge taking the frightened hobbit with him. The Hobbit 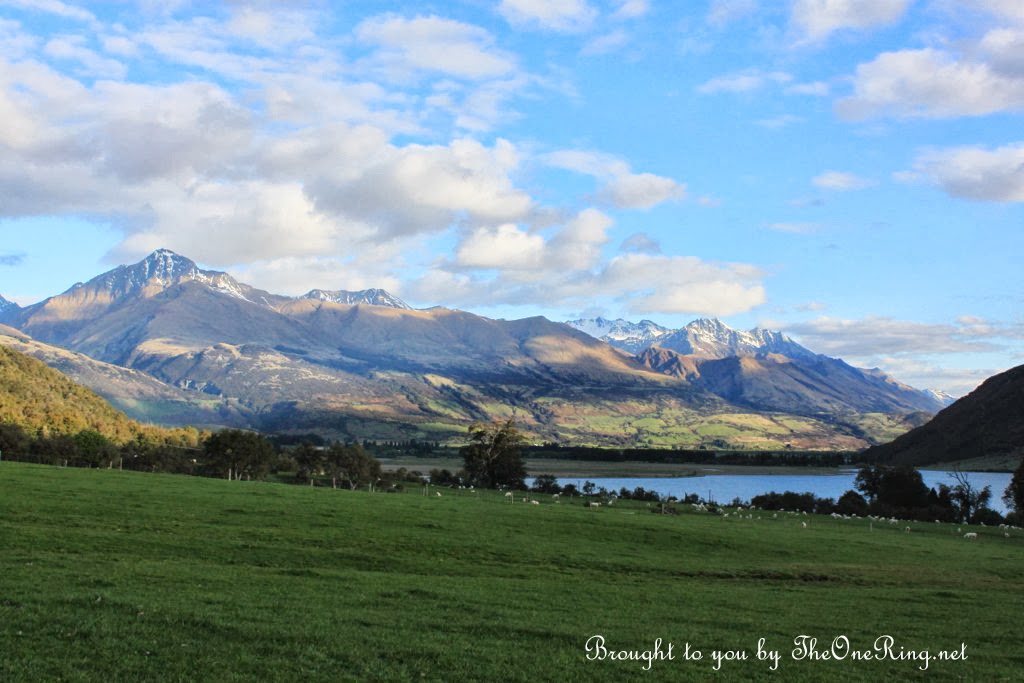