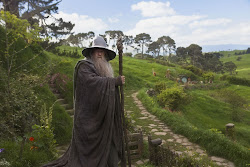 Now that we have three films to think about, one of the questions a lot of people are wondering is: “How will this affect the screenplay for The Hobbit: An Unexpected Journey?”. Just where will the first film end? In this Greenbooks guest post, Thomas Monteath outlines his thoughts on just how the first Hobbit film could work. These views are his own, and do not necessarily represent those of TheOneRing.net or its staff.

An Unexpected Journey, but a predictable break point

There are a range of views to be found on the internet with regard to the likely break point for the first Hobbit film. These have included following ‘riddles in the dark’ with Gollum; the dwarves being cornered by the Wargs; arrival at Beorn’s house. Largely, these views are preoccupied with ‘stuff that happens’ in the book, rather than focusing on what is much more important from a narrative perspective: characters, and their arcs.

It is important to remember that a successful adaptation does not focus on recreating blow-by-blow scenes of the source material. When doing an adaptation, the writers must focus on key themes and key characters. This is all the more important in the case of a story like The Hobbit, where much is left to the imagination and thus the film makers must fill in the gaps.

Whereas a tightly written, dialogue-centric scene like Riddles in the Dark will likely be on screen for about as long in the film as it took to read in the book, some other scenes with less dialogue will need to be hugely expanded, as film is a visual medium. It will take time to show what Tolkien may have described in a sentence (he was notoriously abstract about battle scenes, for instance, probably because he was a First World War veteran who found himself wanting to keep the scent of battle at arms length).

There is thus only one place at which to end film one, and that is with the Dwarves internment by the Wood-elves. If it had remained a two film adaptation, then it perhaps made sense for the first film to include Barrels Out of Bond — the escape from the Wood-elves in barrels down the river. But that escape is likely to be an elaborately choreographed sequence, as Bilbo springs the various dwarves from their cells and evades the guards. Thus it fits better as an opening action/thriller scene to launch the second film, much as the Balrog sequence opened The Two Towers. 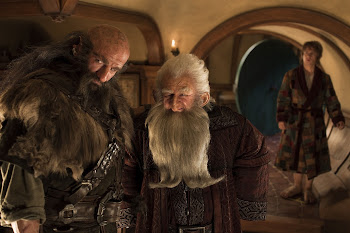 The notion that the films could break earlier than the Company’s capture by the Wood-elves simply holds no water. Bear in mind that the progression from Bag End to Goblin Town, and even the escape from Goblin Town, is virtually identical to the first half of Fellowship of the Ring (Hobbiton; the journey to Rivendell; Rivendell itself; the climb into the mountains; Moria; the Cave Troll/Balrog sequence; the fellowship’s escape into Lorien).

But we need to remember that Fellowship of the Ring had another hour or so of screen time thereafter. In other words, Riddles in the Dark is simply too early in the story to break the film, as is the Company’s encirclement by Wargs. But more importantly, from a narrative perspective, it would mean the film has a beginning, a middle, but no end. For every story needs three acts — setup, conflict, resolution.

Assuming the Hobbit films will be three hours each, the first act (or hour, if you prefer) will be the setup: from the establishment of the Company and the stakes at Bag End (this scene is likely to be quite long, with flashbacks explaining: how Gandalf came across the key and map; the halcyon days of Erebor and Dale to show what motivates the Dwarves; how those dominions were laid waste by Smaug to show what the quest must overcome if it is to be successful); the journey into the Wild; the encounter with trolls (and discovery of the swords in their cave); the Company’s arrival in Rivendell.

Here there will likely be the meeting of the White Council, and Elrond’s outline of the history to the swords the Company found in the trolls’ cave (including flashbacks to illustrate the history of Dwarf/Goblin antagonism, likely including the Battle of Azanulbizar and the role of Azog). This first act will therefore be the expository setup for both the rest of the film and the whole trilogy. 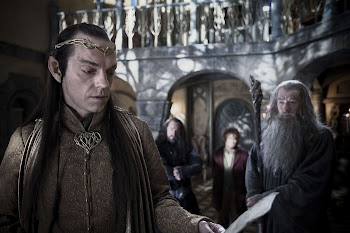 The second hour will be the meat of the conflict that must be resolved in the story. The core of this conflict is the Dwarves’ lack of faith, confidence and respect for Bilbo (bearing in mind that the heart of any drama is character). This is, of course, thrown into sharp relief under the pressure of the events that occur and the challenges they face: the climb into the misty mountains during the storm, and the danger from Stone Giants; their capture by and escape from the Goblins; Bilbo meeting with and outwitting of Gollum; his subsequent reunion with the Dwarves; the Company being chased up trees by wargs.

This second act will thus be the conflict at the heart of the film because the Company is in peril throughout, threatened with being killed/eaten, and under threat of being divided both psychologically (Bilbo is treated with doubt and disdain by the Dwarves, a situation that only begins to change when he finds them following his meeting with Gollum) and physically (Bilbo is abandoned both in the Goblin tunnels, and later when the Dwarves first climb the trees to escape the Wargs).

In short, throughout the second act there is the constant threat that the quest could be brought to a premature and bloody end. These trials need to be passed, and in it, Bilbo must ‘find his courage’ and silence the Dwarves’ criticism of him. 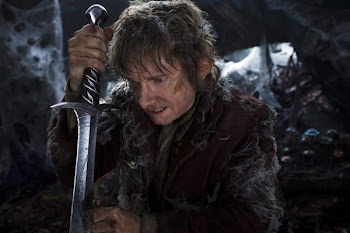 The third act is therefore needed for not only a resolution to the conflicts in the second act (in this third act, far from doubting Bilbo, they begin to cultivate a kernel of faith in him, something that will blossom in the second film as Bilbo becomes the de-facto leader of the Company), and the set-up for the next film. This hour will likely include their escape from the wargs via the eagles; the eagles aerie; introductions to Beorn; Beorn’s house; the road to Mirkwood; Gandalf’s departure at its eaves; the Company’s journey through Mirkwood (including Bombur’s incident at the river); the incident with the spiders; capture by the Wood-elves.

Intercut with these later scenes will no doubt be scenes of Gandalf, travelling down the western edge of Mirkwood seeking Radagast, or perhaps scouting out Dol Guldur (the actual assault of Dol Guldur will likely be a large part of the second film).

This third act will thus have a resolution of the conflicts of act two (the threats to their lives, and the beginnings of a change in the Dwarves’ attitude towards Mr Baggins), a reunion of Bilbo with the Company, and then a necessary recuperation at Beorn’s to allow the audience to catch its breath after a long middle act fraught with danger and tension. It will then have the final scenes that both throw them all back into the fire (spiders), and in doing set up a cliffhanger (incarceration by the Wood-elves) to draw the audience back for film two.

It’s all about the character arc

In speculating on the structure and plotting of these adaptations, and particularly the break points between films, it is important to put character and their arcs before a concern with the length or brevity of particular scenes as found in the book. Once we do this, it becomes quite plain what the structure is likely to be.

Engaging characters have a clear arc, and when we put these arcs at the heart of the film then the natural break points become clear.

Thomas Monteath is a life-long Tolkien aficionado, who still believes –- with apologies to the excellent Andy Serkis -– that the finest Gollum was Peter Woodthorpe in the BBC’s 1981 Radio adaptation. In real life he an academic in the UK, who can on occasion be found propping up the bar at the Eagle & Child.