In January, Lord of the Rings Online an expansion to the MMO called Riders of Rohan. Launching on September 5 this year, the game expansion adds the regions of East Rohan, Amon Hen and the Eaves of Fangorn Forest, a new mounted combat system plus a new, original score by award-winning composer Chance Thomas.

Thomas’ work should be familiar to anyone who’s already played the Lord of the Rings Online Games: Shadows of Angmar and Mines of Moria. Writer Layton Shumway recently visited a recording studio near Thomas’ Utah home and learned just how much effort the maestro behind the music of Turbine Entertainment’s Lord of the Rings Online puts into his craft.

Inside the music of LOTRO: The Riders of Rohan

If you doubt composer Chance Thomas’ credibility as a Tolkien fan, put those fears to rest.

“I get a little nerdy about it,” Thomas admitted to me. 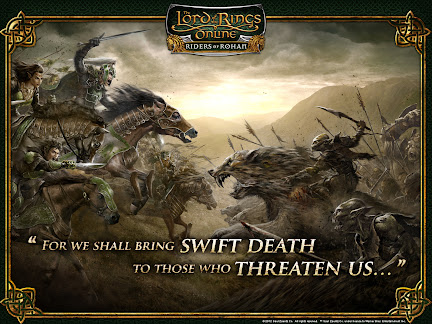 Thomas told me that he’s got heavily annotated maps of Middle-earth, reams of unpublished background info, and most importantly, dog-eared and battered copies of Tolkien’s original works — all in an attempt to capture the soul of Middle-earth in an interactive form.

(You can see Thomas talk a bit more in-depth about his research and musical philosophy in this YouTube video, posted on TORn a few days ago.)

For the upcoming LotRO expansion Riders of Rohan, Thomas described to me the challenges of capturing the melodic feel of the rolling grasslands of Theoden, while avoiding the well-known strains of Howard Shore’s film soundtrack.

“We’ve all seen the movie. What’s the most iconic theme in all of Howard Shore’s writing?” Thomas said, humming the easily recognizable eight-note motif. “I’m thinking, I can’t compete with that. What am I going to do?”

It’s a difficulty Thomas has faced before in his work on licensed products: trying to stay true to what the literature teaches while dealing with a different product that’s very prominent in the public consciousness.

The answer Thomas found lay in the history of Middle-earth. “You enter the Wold of Rohan in the game,” Thomas said. “What has happened? What’s happening now? Rohan is a rugged, hardy country. These are hardy people, sort of based loosely on Anglo-Saxon people. They’ve had some glory in the past, but right now is not so good. So I’ve got to convey an idea of faded glory, an idea of breadth, expanse, strength, and power. 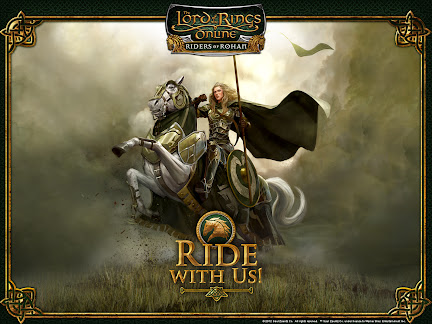 “The expansion takes place at a time when the War is encroaching, but it hasn’t really reached a full boil — more of a simmer. Trying to fold all that into music is an interesting challenge.”

Thomas described the three general types of gameplay that Riders of Rohan will feature: expansion, travel, and combat. This includes mounted battles, a first for the LotRO series.

“We talked a lot about that with the development team,” Thomas said. “The basic idea was, I want to feel like I’m galloping along. And when you hear the percussion, you’ll swear you can hear things like horse harnesses. There’s a real leathery quality, because we’re using a lot of hand drums with leather skins.”

I listened to a section of these tunes while I visited Thomas in the studio, and the music contains a tremendous energy and feeling of forward motion. There’s a lilting, rhythmic quality to it that definitely evokes images of the horse-lords of the Rohirrim.

Thomas went on to describe other specific areas in Riders of Rohan: “You go to the Sutcrofts, and the War hasn’t really come there yet. They’re sort of in a bubble. So their music is still peaceful — a little naïve, maybe. But in the Norcrofts, the Lord of Norcrofts is secretly in league with Saruman. So you’ve got this feeling that something’s wrong, this undercurrent of dissonance and anxiety. It makes you look over your shoulder. Then you’ve got the Entwash Vale, as you approach Fangorn. So that starts to feel a little more mysterious while still keeping some of the core Rohan feeling.”

When you combine Thomas’ enthusiasm for and knowledge of the source material with his skill as a composer, you know that wherever players travel in LotRO, they’ll have the right tune to fit the mood. That’s a job Thomas takes very seriously.

“I like to say, when the player is playing the game, a good game score plays the player, moving their emotions,” Thomas said.

The Riders of Rohan expansion for Lord of the Rings Online hits stores on September 5, 2012.