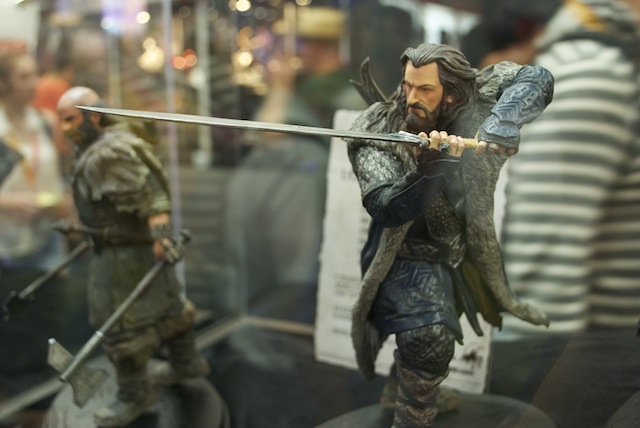 TORn forum member DarkJackal (who gets full credit for this article) made a fascinating find about the 1:6 scale Thorin Oakenshield miniature being made by WETA and currently on exhibition at Comic-Con.

Seemingly, the statue comes with a backgrounder on the packaging. It reads:

A proud and noble Dwarf of resolute character and stern bearing, Thorin was the grandson of Thror of the line of Durin and heir to the lost throne of Erebor. Alongside Moria, Erebor stood as the greatest of the realms of the Dwarves, a vast kingdom carved from the living rock of The Lonely Mountain, bustling with trade and bursting with wealth.

Down upon Erebor the great dragon Smaug had fallen and the city and its people were engulfed by the inferno of his coming. Thorin and his kin were fortunate to escape with their lives, though they left everything else behind. Their treasure and pride was swept up by the dragon into a pile upon which he curled to sleep, deep inside the mountain.

Throughout the long, hard decades of his exile, Thorin’s mind ever dwelled upon the thought of some day retaking the mountain and restoring his people to their erstwhile splendor. In time he would form a company of Dwarves, thirteen in number, and at the Wizard Gandalf’s insistence, reluctantly employ the services of the Hobbit Bilbo Baggins, setting out for The Lonely Mountain with dreams of gold and glory.

DarkJackal writes: The Limited Edition statue from Weta will give Comic-con attendees (or anyone who wants to pay double for it on ebay) a chance to own Thorin complete with his shield, while the rest of us will just get Thorin sans shield. It amuses me that even with this hype, we still have a hard time seeing the shield! 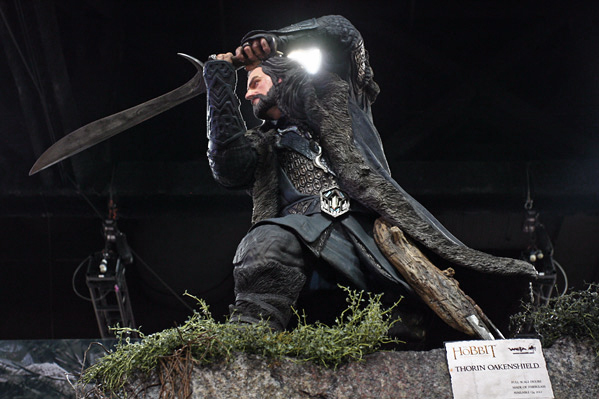 It is concealed quite well under his coat (another angle here). The best view is on the life-size statue of Thorin, currently poised to pounce on anyone walking by the Weta booth in San Diego.

From the back of the Weta statue box comes this bit of additional information:

In this exclusive edition, Thorin carries at his side the item that gave him his name. An oaken shield, crafted from an Oak tree that once saved his life.

I noticed a few details on the shield in these shots that I was not expecting, but which help answer my questions over some aspects of the design. In this early view of a prototype (sitting on the table in front Peter Jackson) the shield maintains an organic shape, with the exception of two “prongs” which I could not figure out the reason for. While it still is not very clear in the newest images, these seem to be metal blades jutting out from one end, riveted to the wood. These nasty looking additions could make this object a useful weapon in a pinch.