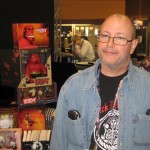 Message board members Earl and Theodred alerted us to a recent video interview with Mike Mignola at collider.com. In addition to saying how much he’s looking forward to Comic-Con, Mike made some brief, but very interesting comments about the week and a half he recently spent in New Zeeland working on The Hobbit, and what we can expect:

“It’s hard to say at this point, because so much work had been done before I even got there that I looked at it and I said wow, it looks like a 16 hour, insane movie, there’s so much in it. It’s too early for me to tell how much stuff is going to get pared down. I don’t really feel comfortable saying too much, except that it looks amazing. And it’s very much a del Toro stamp on that world.”

Check out the complete interview here.