Ringer Diedye has posted another wonderful FLASHBACK in our forum detailing the events that took place in the Tolkien universe between July 27th and August 2nd. This is a weekly feature that Diedye posts in the forum, so if there is ever a time we don’t post it on the homepage of TORn, make sure to check the Main board in our forums. Click on the link below to transported in time!

Here’s your FLASHBACK for…
July 27 to August 2

1917
July 31 – Captain Thomas Kenneth Barnsley of the Coldstream Guards, known as the wise-cracking “Tea Cake” to the T.C.B.S., is killed in action near Ypres, Belgium, while consolidating a captured position. He is commemorated in the Hall of Memory built by his father, Sir John Barnsley, outside Baskerville House in Birmingham.

1937
July 28 – Tolkien visits the London office of Allen & Unwin. He brings with him four completed illustrations (Rivendell, Bilbo Woke Up with the Early Sun in His Eyes, Bilbo Comes to the Huts of the Raft-elves, and Conversation with Smaug) for The Hobbit, which are approved and left to be sent to Houghton Mifflin.

1938
July 29 – Eric Valentine Gordon, Tolkien’s friend, collaborator and successor to the chair of English Language at Leeds, dies in hospital at the age of forty-two.

1944
July 31 – In a letter (#76) to his son, Christopher, Tolkien muses on the “Englishry” of Sam Gamgee and the other hobbits. “Had I thought it out at the beginning, I should have given all the hobbits very English names to match the shire. The Gaffer came first; and Gamgee followed as an echo of old Lamorna jokes.” (It was at Lamorna Cove in Cornwall, while on holiday in 1932, that Tolkien amused his children in giving the nickname “Gaffer Gamgee” to a local “character”, “an old man who used to go about swapping gossip and weather-wisdom and such like” (Letter #257).

1947
July 31 – In response to a letter from Stanley Unwin, Tolkien mentions Rayner’s report on Book I of LOTR, specifically that the younger Unwin has discovered a weakness in the connection between LOTR and the original version of The Hobbit, namely Gollum’s offering of the One Ring to Bilbo as a gift.

Quote
But I don’t feel worried by the discovery that the ring was more serious than appeared […] However, Gollum later becomes a prime character, and I do not rely on Gandalf to make his psychology intelligible. I hope it will come off, and Gandalf finally be revealed as perceptive rather than ‘hard put to it’. Still I must bear this in mind, when I revise chapter II for press: I intend, in any case, to shorten it. The proper way to negotiate the difficulty would be slightly to remodel the former story in its chapter V.

.
He goes on to list some of the people who have so far had the good fortune to have a peak at the unfinished LOTR: C.S. Lewis, Charles Williams, Christopher, “a solicitor (Owen Barfield), a doctor (Robert Emlyn Havard ?), an elderly army officer (Warren Hamilton Lewis), an elementary school-mistress (an American high school teacher named Dorothy, as suggested by Priscilla Tolkien, who visited the family during the war), an artist (Marjorie Incledon), and a farmer (as per Priscilla Tolkien “a pork farmer from Wiltshire, who was an occasional visitor to the Inklings and was known affectionately as Little Pig Robinson [after the character by Beatrix Potter]”).

1950
August 1 – Tolkien writes to W.N. Beard, returning the proofs of The Hobbit and refers to the changes that were made to it and how they affect his current work on LOTR.

It is now a long while since I sent in the proposed alteration of Chapter V, and tentatively suggested this slight remodeling of the original Hobbit. I was then still engaged in trying to fit on the sequel, which would have been a simpler task with the alteration, besides saving most of the chapter in that overlong work. […] The sequel now depends on the earlier version; and if the revision is really published, there must follow some considerable rewriting of the sequel.

1964
July 31 – Rayner Unwin visits Tolkien and brings along the design made by Pauline Baynes for the slipcase for the deluxe set of LOTR. As Rayner later informs the artist, Tolkien “was enchanted and said you had exactly his eye for landscape and asked if, when we had finished using it for technical reproduction, he could have your original on permanent loan in his study” (University of Reading archive).

August 2 – When a group of boys at St. Marylebone Grammar School in London write expressing their wish to make a tape recording of all or most of LOTR, Tolkien forwards the letter to Rayner, expressing his dislike of the proposal and apprehension at having such tapes in existence and out of his/their control. (Letter #258)…

I wish that ‘Copyright’ could protect names, as well as extracts. It is a form of invention that I take a great deal of trouble over, and pleasure in; and really it is quite as difficult (often more so) as, say, lines of verse. I must say I was piqued by the ‘christening’ of that monstrous ‘hydrofoil’ Shadowfax* – without so much as ‘by your leave’ – to which several correspondents drew my attention (some with indignation). I am getting used to Rivendells, Lóriens, Imladris etc. as house-names – though maybe they are more frequent than the letters which say ‘by your leave’.

* (In 1964, an Aquastroll hydrofoil made a trial crossing from Calais to Dover. It had been christened Shadowfax.)

1965
August 2 – Austin Olney, head of children’s authors at Houghton Mifflin in Boston, writes to Tolkien, informing him that Ballantine Books, in an effort to hinder the publication of an unauthorized edition of The Hobbit, have produced their own paperback, albeit unrevised. He provides Tolkien with a copy of the cover art done by artist Barbara Remington. 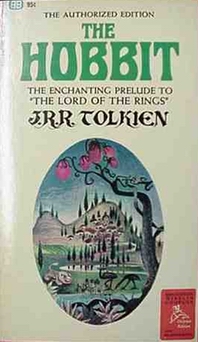 1969
July 28 – Edith Tolkien writes to Rayner Unwin with an update of her husband’s health (Tolkien had been feeling ill since the beginning of the month and had recently had X-rays done). The results of the tests were negative, which came as a big relief for the couple, who think it may have been a virus.

July 31 – In a letter to Christopher (#311), Tolkien, now back at work after his health scare, admits to feeling “a bit desperate: endlessly frustrated. […] Business – endless – lies neglected, yet I cannot get anything of my real work finished. Then came this last stroke of malice. I was assailed by very considerable pain, and depression, which no ordinary remedy would relieve. […] I feel quite well: i.e. as well as I did before the outset. But life is not easy. The Parke (the domestic help) has gone sick. Mummy is ailing, and I fear slowly ‘declining’. Also I feel very cut off.”

1972
July 27 – Tolkien decides, as a gesture of remembrance of Edith, to donate the desk she had given him in 1927 (on which he wrote and illustrated The Hobbit and much of LOTR), to the Help The Aged charity. He provides a certificate of authenticity to go with the desk when it is sold at Sotheby’s. 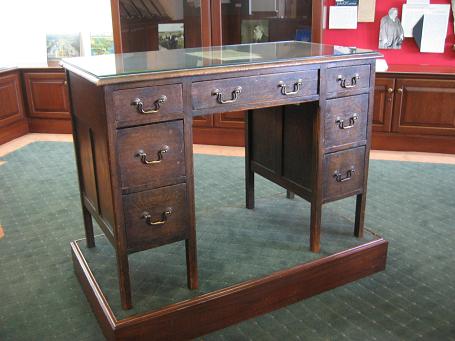 1999
July 28 – TORn contacts Wi Kuki regarding the rumor that he has been cast as Ghan-buri-Ghan, a chieftain in Lord of the Rings. His response? “First I’ve heard about it’.”

July 29 – Xoanan announces that Stuart Townsend has been cast as Aragorn.

July 30 – The Guardian Unlimited posts an interview with Peter Jackson in which he reveals the logic of filming three movies at the same time, that he does read fans’ comments (sometimes spending hours and hours on fan sites), who doesn’t make it in to the movies (Tom Bombadil), who does (Treebeard) and names a few of the actors who will be taking on the roles of Frodo, Sam and Gimli (Timothy Spall ?!), how he’ll tackle the “little people” aspect (i.e. hobbits & dwarves) by not necessarily using “little people”, the problems of making the LOTR believable so that established fans and newbies alike will be drawn to the trilogy, and why New Zealand is Middle-earth. “It’s a once in a lifetime experience, and if we do it and we can be proud, then we want to retire when it’s all over.”

–> A tongue-in-cheek spy report claims that Leonardo di Caprio will play a part in the LOTR films, but his part is not yet known.

2000
July 31 – In a TV interview, Mark Ferguson reveals that he will be playing the role of Gil-Galad in FOTR.

2001
July 27 – In a mini-interview with UK newspaper “Metro”, Andy Serkis talks about what playing the role of Gollum entails and what Andy’s own addiction is.

July 31 – Dark Horizons reveals a LOTR promo collage of an orc, Saruman and some Ringwraiths…

August 1 – The LOTR stunt crew give a shout-out to TORn and offer up a few tidbits on their stunt work on LOTR and a little snapshot of themselves. — > The July edition of Sci Fi News has the first images of the Brazilian version of two LOTR posters.

August 2 – Peter Jackson goes all Chainsaw-Massacre-y (not really) to kick-start the refurbishment of Wellington’s New Embassy Theatre, which will be the host of the New Zealand premiere of the LOTR trilogy.

2002
July 26 – Gamespy.com has the latest comic from “Force Monkeys” with a LOTR flavor.

, what his staffs were made of and what Gandalf says to the moth atop Orthanc.

–> Yanick (DUSSO) Dusseault’s matte paintings for LOTR are posted on his website.

August 2 – In an interview with Stuff.co.nz, Peter Jackson crypticially remarks that he has hopes to bring Tolkien’s The Hobbit to the big screen, but that “the film rights are tied up in a ‘complex’ arrangement involving a rival Hollywood studio.”

2004
July 27 – Sir Ian McKellen again responds to readers’ questions in his latest E-post. He tackles such issues as his absence from the TTT Extended Edition, the farewell scene in ROTK, learning to speak Elvish, and his doodles.

July 29 – The Fellowship of the Ring turns 50! TORn offers its congratulations (along with a TOP 50 list by MrCere and a TOP 50 list of important people in the Tolkien universe) and the BBC digs up some reviews from that time. All info has been collected from Hammond & Scull’s “J.R.R. Tolkien Companion & Guide”; “The Letters of J.R.R. Tolkien”, “Tolkien & The Great War”, TORn and various sites on the web.